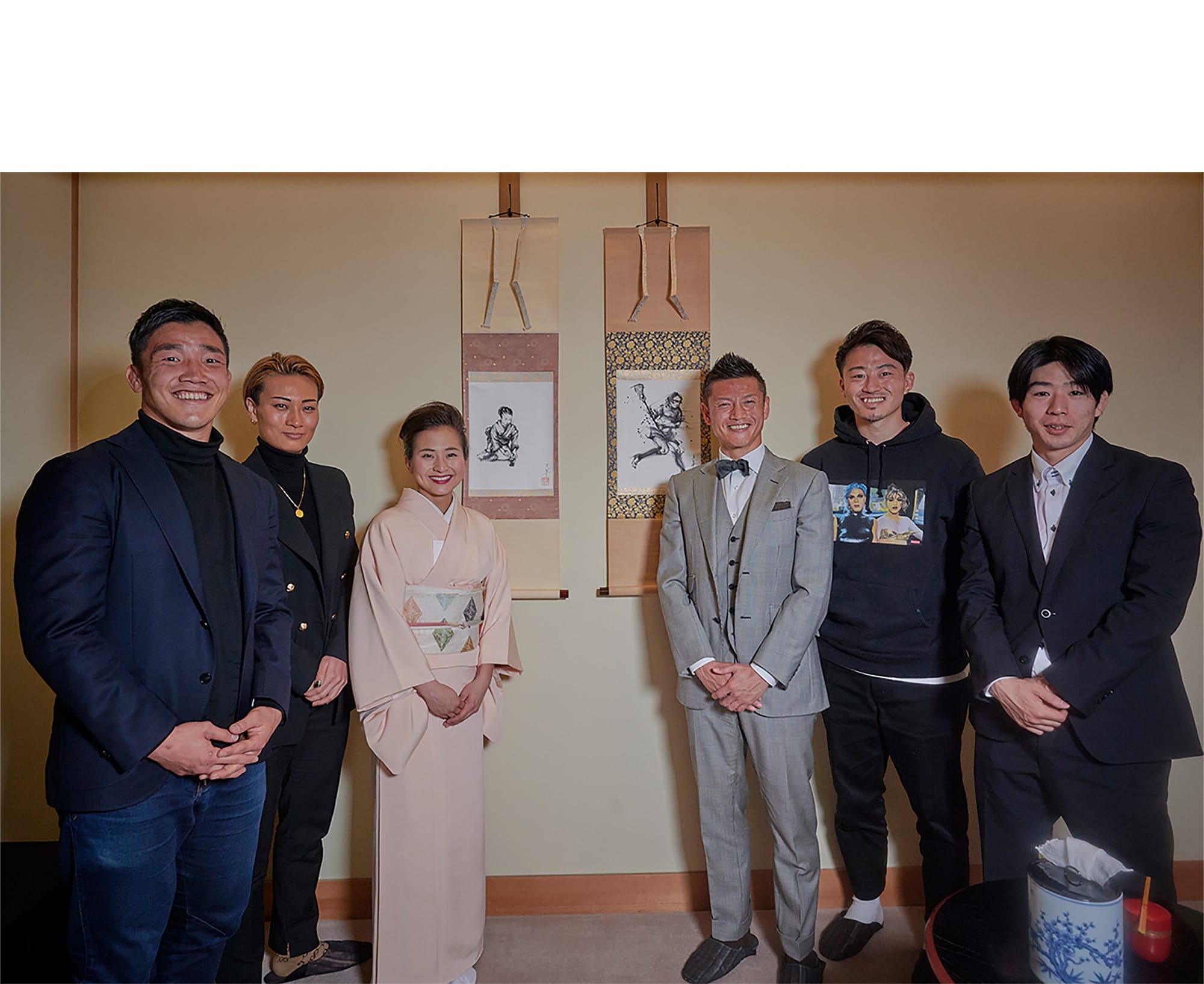 The reason behind the devotion to tea by the top athletes around Sosho Kobori.

One afternoon, the Athlete Tea Ceremony started at the Enshu style head family’s tearoom located at Tokyo’s Kagurazaka. The host was the Iemoto’s second daughter and former national lacrosse player for Japan, Sosho Kobori. Kobori freely invites athletes who are interested in tea to the tearoom. For this day, there were five guests and they sat in front of the tokonoma (elevated alcove in a traditional Japanese room). The guests were Ryuji Bando, a former soccer player of Gamba Osaka, Shokei Kin, an active rugby player of NTT Communications Shining Arcs, Shingo Maeda, an active American football player from Obic Seagulls, YUI, a double-dutch regstyle performer and YUUTAROU, a parkour athlete and leader of the parkour group, monsterpk. The five guests gathered each in their own ways in suits and hooded sweatshirts and excitedly watched Kobori making tea. The tearoom looked different from usual when the athletes entered into the tearoom. It may be due to the energy that each athlete emits. This tea ceremony with top athletes who gather through the tea master Shoso Kobori, has a style of freedom and solemnity.

Soccer, rugby and American football are familiar sports, but double-dutch and parkour may relatively be a new sport. Double-dutch is done by jumping over two long ropes and have lately been catching attentions for its competitions that are based on artistic expressions such as fusion, which integrates the sports with free-style and music. Parkour is a sport that uses physical abilities to overcome the obstacles and it is expected to become an official sport at the Paris 2024 Olympics.

By the time the sweets appeared in front of the athletes, the atmosphere had become relaxed. From the left, Ryuji Bando, Shokei Kin and Shingo Maeda. 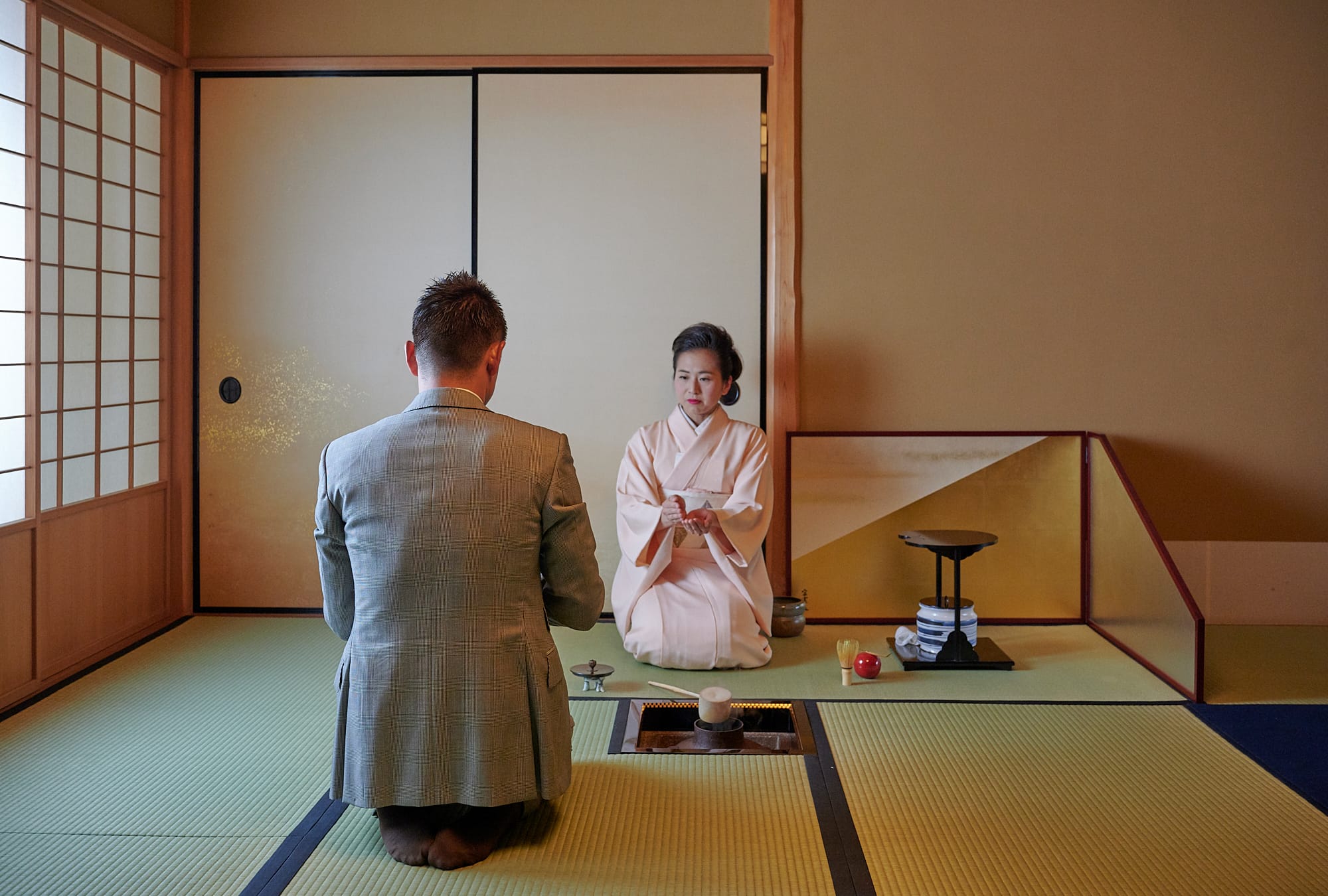 The guest of honor of this day was Ryuji Bando. He checked his shosa (rule-governed body movements) one by one. Bando is a former national soccer player for Japan and has played for Gamba Osaka, Consadole Sapporo, Vissel Kobe, Cerezo Osaka, Sagan Tosu, Omiya Ardija and FC Ryukyu. From March of 2020, he became the specially appointed director for J League. 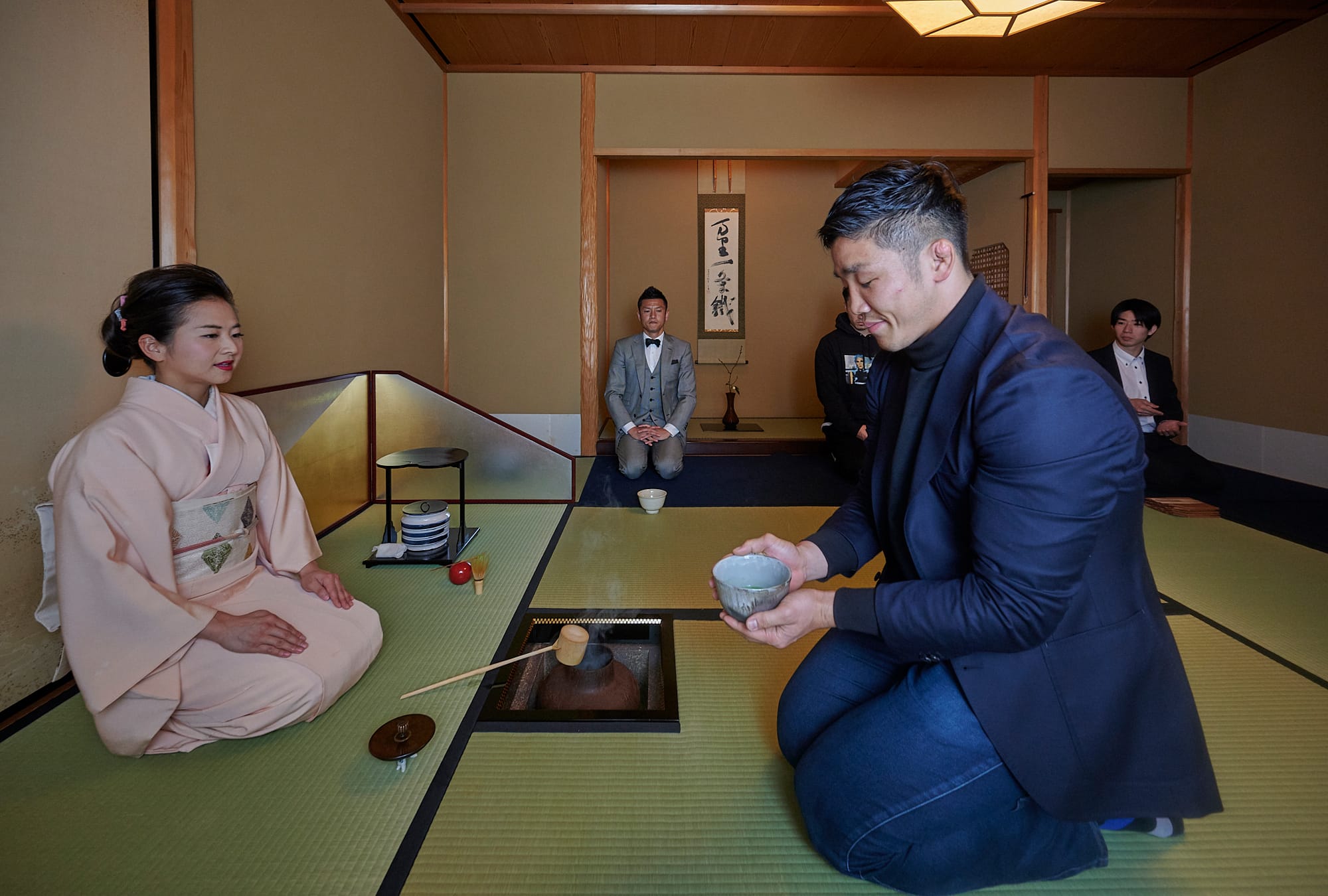 Shokei Kin carefully receives the tea from Kobori. Kin is a captain for the NTT Communications Shining Arcs and his position is flanker.

The guest of honor for this day was Bando who had retired as a soccer player last year, he looks forward to taking part in soccer from the management side from now on. “In the tearoom, one can look at oneself” said Bando. Sado (Tea ceremony) may help at a turning point from a player to a support role. Rugby player, Kin often participates in sado. Since he shared the same training gym with Kobori, he wished that he could experience the tea ceremony which he had been interested in from before. Kin makes tea at home as well and he said, “The mind appears in the taste of the tea and it is different every time. The interesting part of sado is the sense of confrontation with the tea and just yourself”. American football player, Maeda have participated in a tea ceremony twice before and he is interested in Zen and mindfulness. Since sado has a process of concentrating, he felt that the essence may be the same. 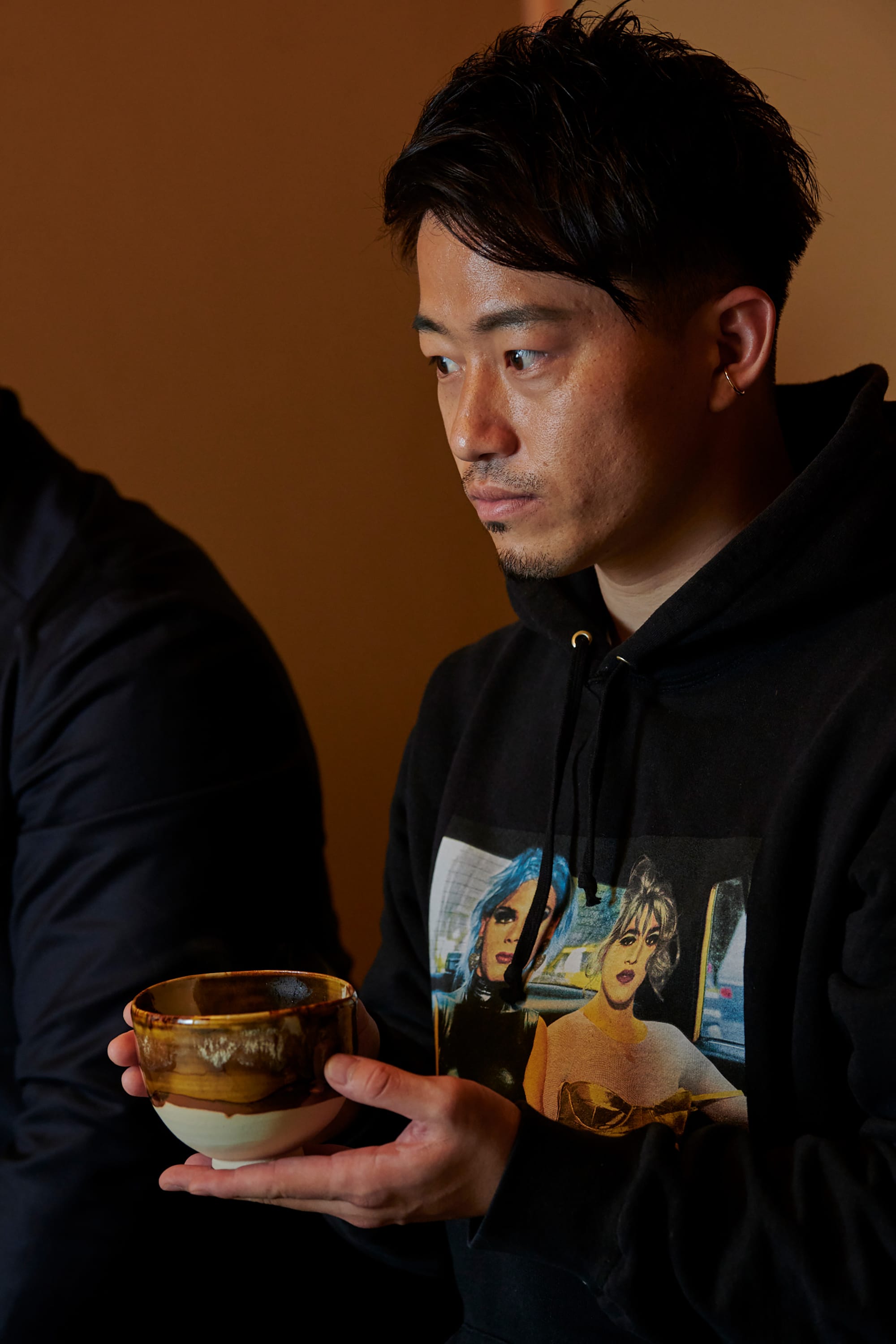 American football player, Shingo Maeda joined the Obic Seagulls in 2016 and his position is wide receiver and returner. He said that the experience with sado has made positive influence on his sports and to his entrepreneurship. 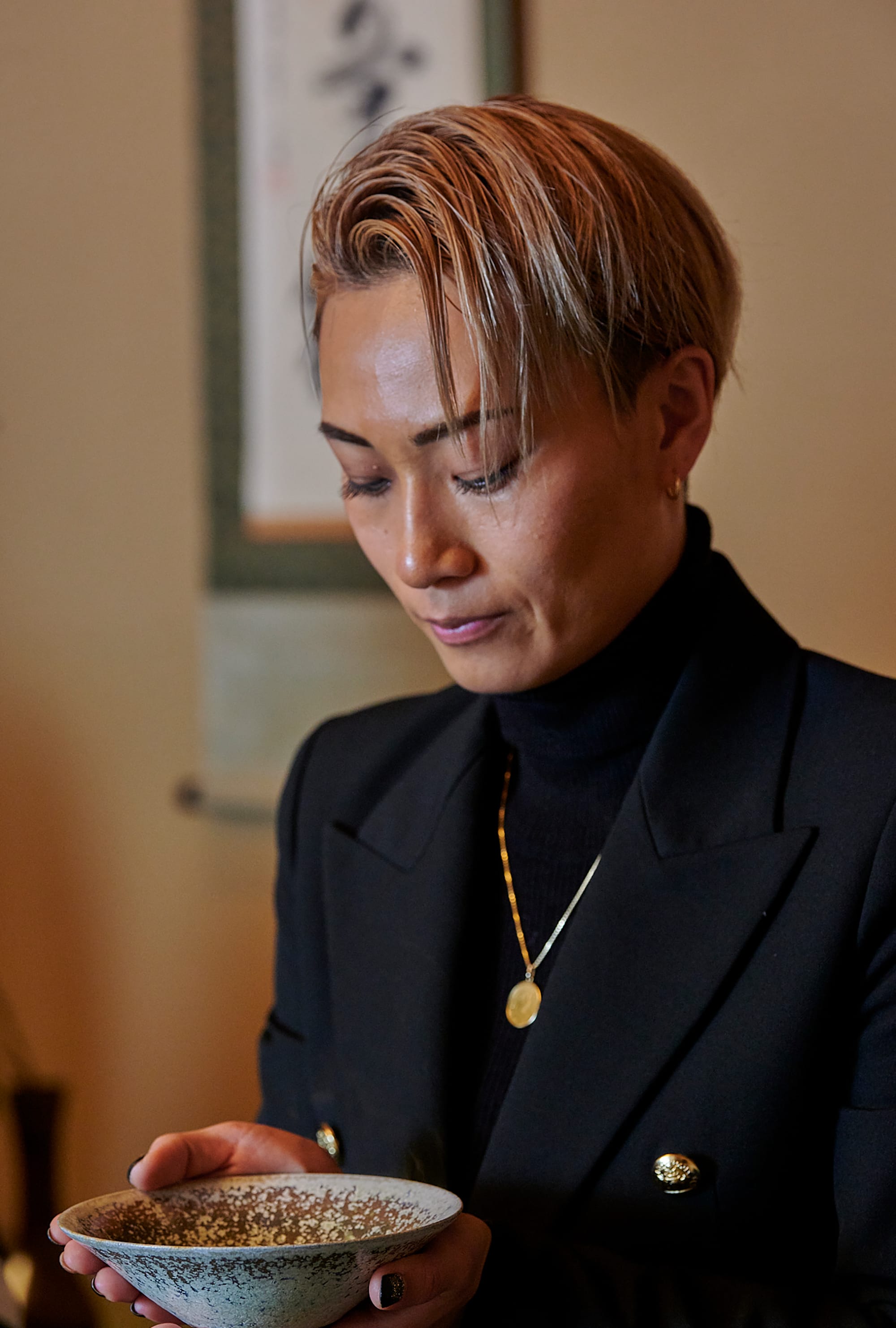 This day was the second time to participate in a tea ceremony for YUI . “I discovered that the spirit of Sado has a common point with double-dutch” said YUI, who is a professional double-dutch performer, member of the REGSTYLE, calligrapher and MC. YUI has won three consecutive world championship from 2017 to 2019. 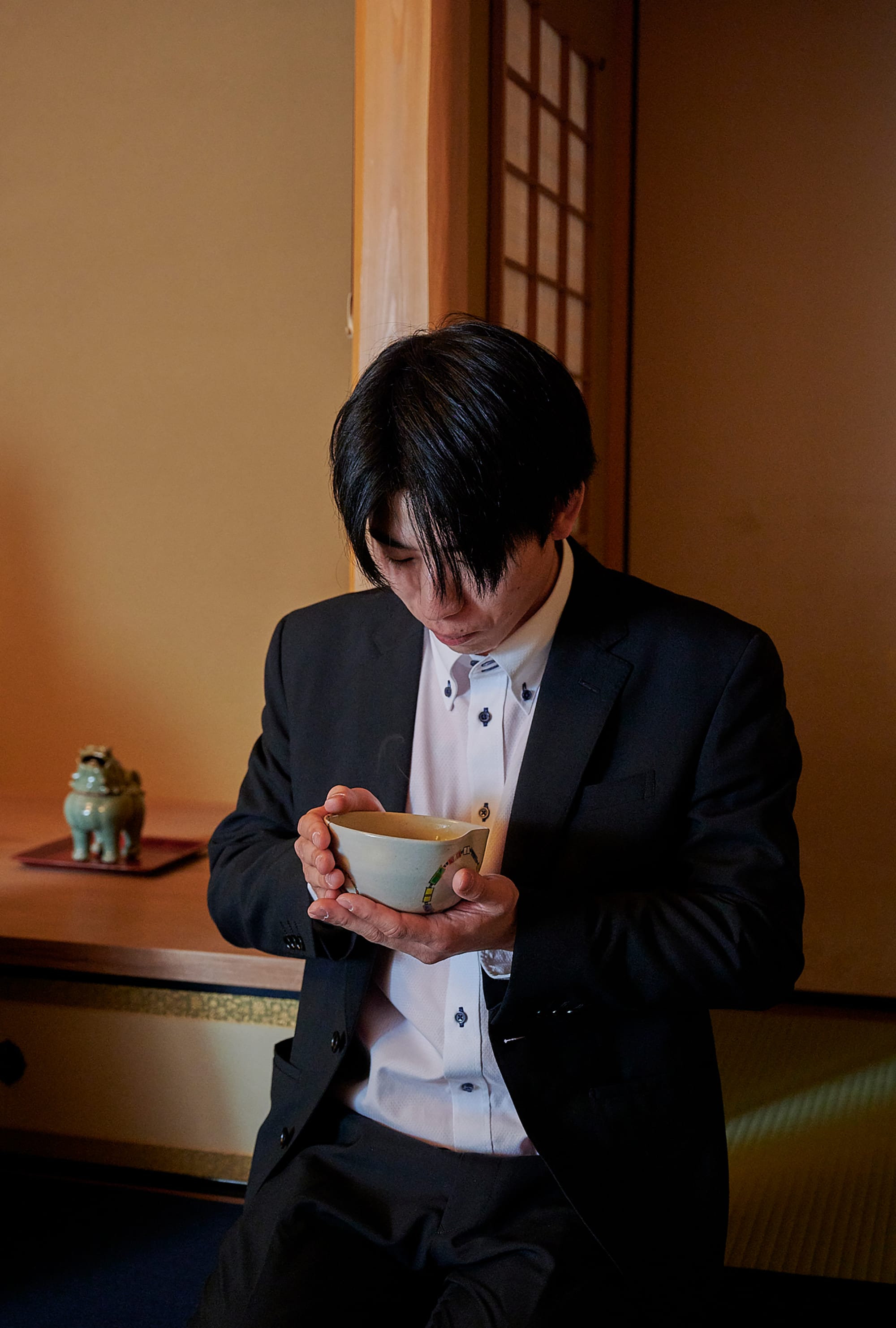 YUUTAROU tasted the tea from the chawan (tea bowl) with the five-rings pattern. Before starting the tea ceremony, he carefully checked his body movements for using the chasen (tea whisk). He is a parkour athlete and the leader of the parkour group, monsterpk. He have participated at the world competition in Vancouver and the videos taken by himself are popular and he holds 260,000 followers in tiktok. (TikTok ID : yuutarouparkour)

“Double-dutch is omotenashi (hospitality)“ said YUI. Double-dutch is performed by at least 3 people and the performers always need to be thinking about others. The turner is there to spin the rope to allow the center performer to perform lively. Being a calligrapher as well, YUI believes that human needs stillness and motion. This day, YUUTAROU experienced tea ceremony for his first time and he said, “my image of tea ceremony was removing a katana sword to enter through the small entrance of the teahouse”. When using the chasen, his body movement reminded us about his usual exquisite performances.

The set of tea wares were selected based on the personal feelings of the athletes.

The tea wares for this day were selected by Kobori for each athlete. In addition, a Zen terminology, “Banri-Ichijo-Tetsu” was set on the tokonoma. These words have an image of a steel which can pierce through the world. In Zen it refers to the stable mind of buddha and expresses the strong will and state of mind. The akamaru tea wares resembled the red sun of the Japanese flag and shows respect to the athletes who are representing the country. The tea wares had the team colors which the athletes play for, and there were also ones that look similar to the Olympic emblem. The selection shows the care and attention Kobori put in. “Next, I will ask everyone to make tea” said Kobori, and the guest moved to the ryureiseki (area in the teahouse for seated tea ceremony) on the second floor. Each athlete made and served tea to the guest they selected. After tasting the tea, the athletes shared their tasting comments such as, the tea having a strong taste and being sweet and tasty. 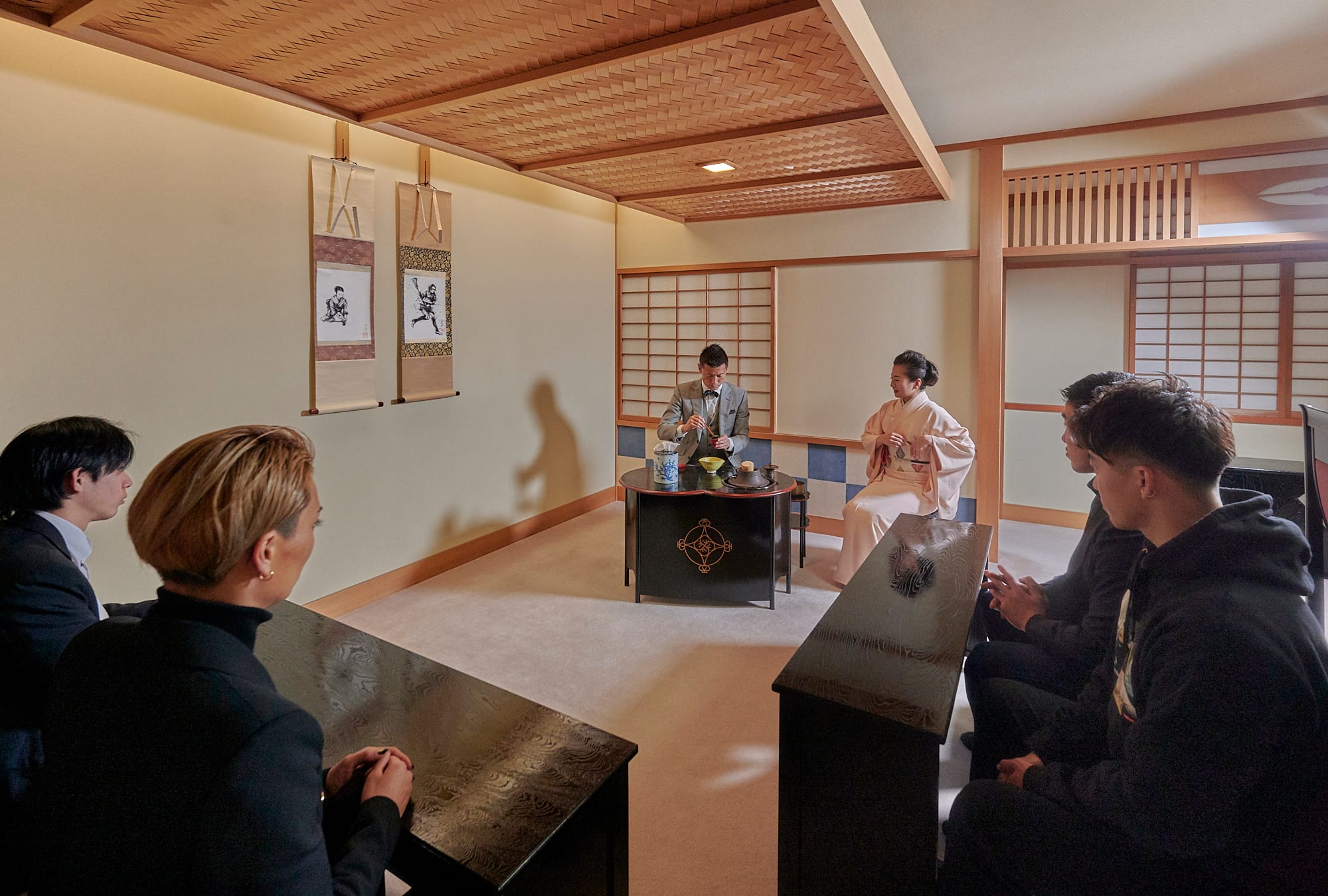 The athletes moved to the ryureiseki and shared conversation about their sports in the cheerful atmosphere. 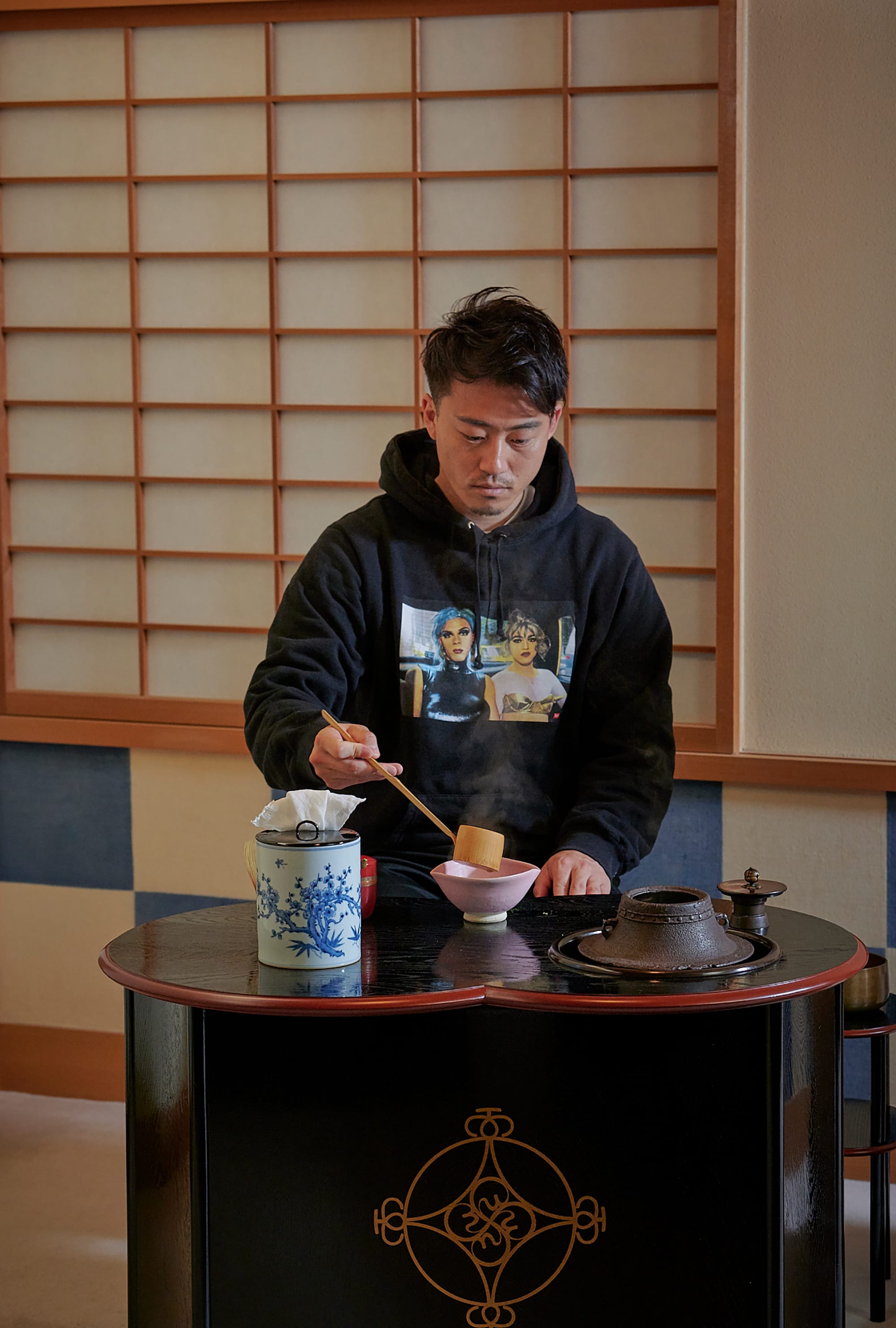 Each athlete made tea. It was the first time to make tea in ryureiseki for Maeda. 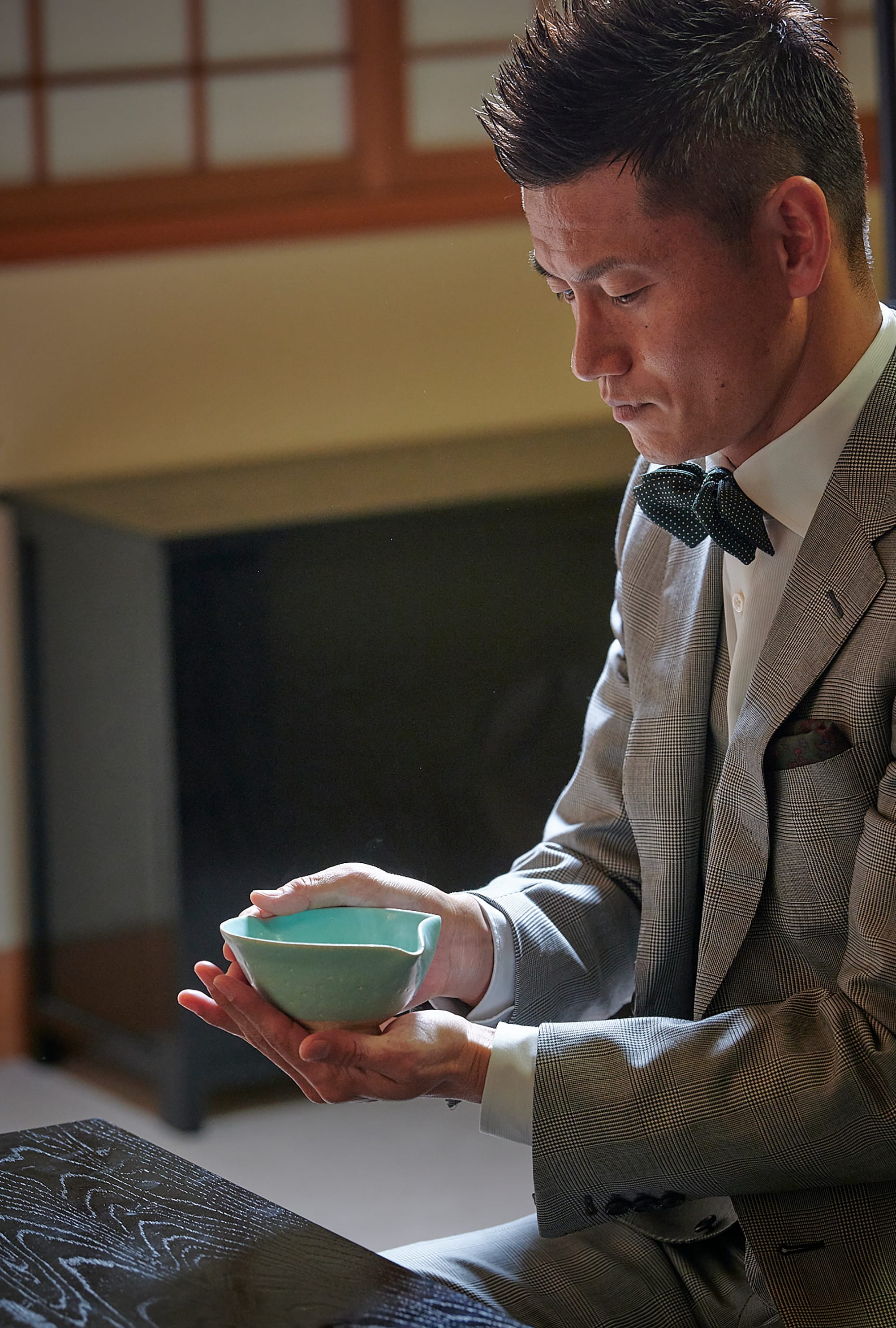 Bando tastes the tea which Kin prepared. The athletes enjoy the sense of calmness and tension at the same time. 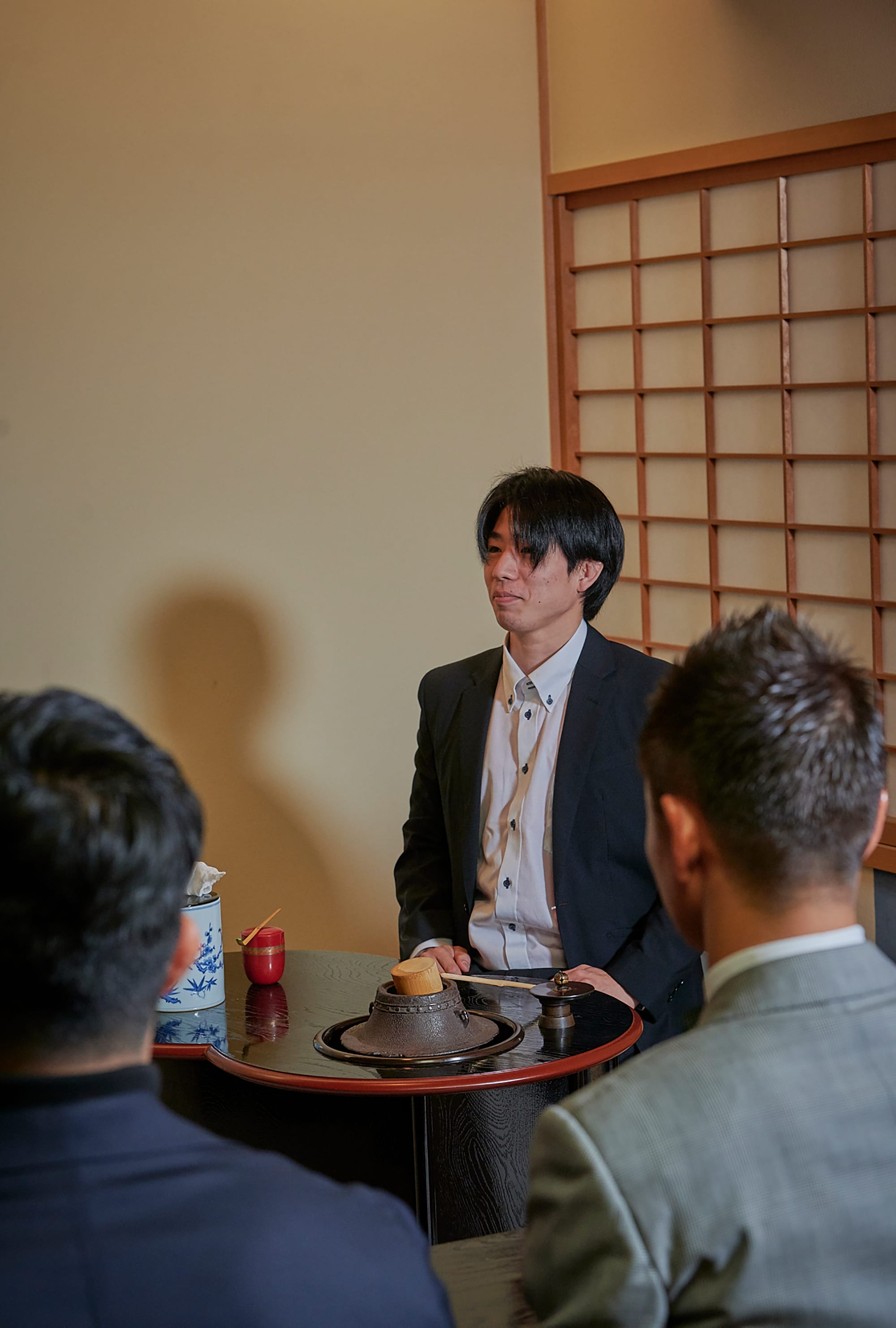 YUUTAROU was able to learn the shosa of tea ceremony and made it his own through watching the other athletes’ shosa.

The athletes felt that the tea was a mirror of themselves and that the taste can change from their physical and mental condition. It was interesting to watch the athletes expressing tea using their body movement. Before starting any discussion about the tea brands, history of the tools and manners for making tea, there is the physical body that feels and it is important to sincerely express what was felt. This was the moment when the athlete tea ceremony was realized as not only a tea ceremony but as a tea ceremony which is connected to sports which may seem like a different field.

Kobori herself is a former national lacrosse player for Japan. She is still an active lacrosse player and plays for the corporate club team, Mistral. We hope to hear more about her passion behind hosting and spreading the athlete tea ceremony as an athlete and tea master born in the head family of the Enshu style tea house. 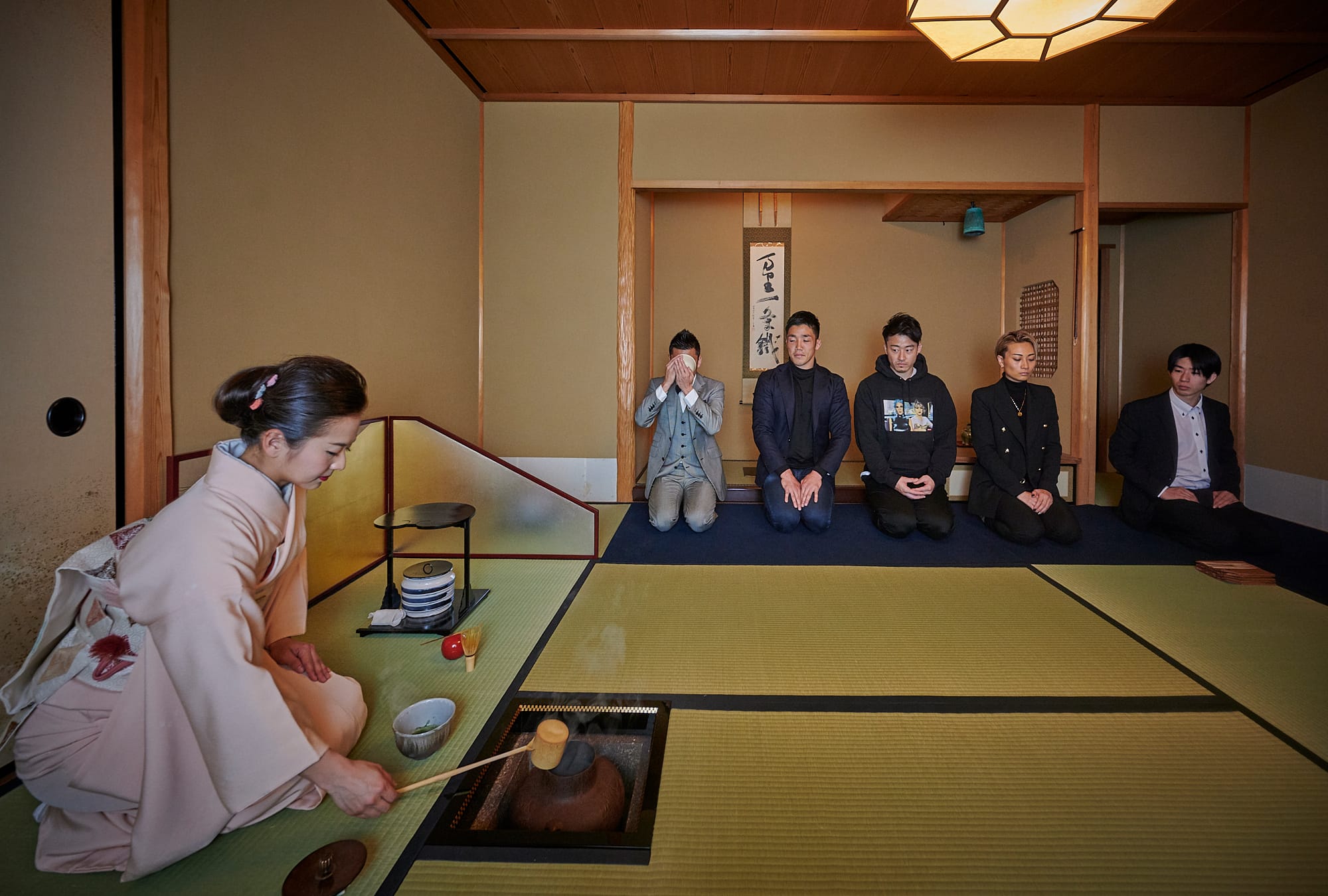 The athlete tea ceremony became a place where athletes from different sports discovered similarities in each other.

Kobori is a former national lacrosse player for Japan. She is an active player for the corporate club team, Mistral. After training under the Iemoto, she introduces and spreads sado while playing as an active lacrosse player. Kobori is gathering attention from integrating and developing sports and culture and continues to attempt new challenges such as the athlete tea ceremony.

Understanding the Challenge of Ar… 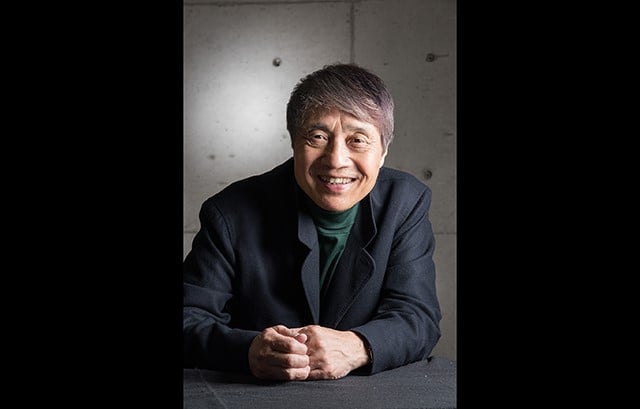 Ando Tadao’s reason and wish to announce his works from Osaka, the city where his o…

The New Horizon that Miyako Yoshi… 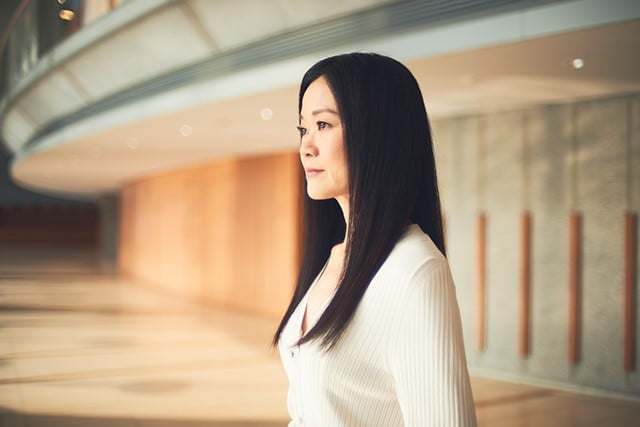