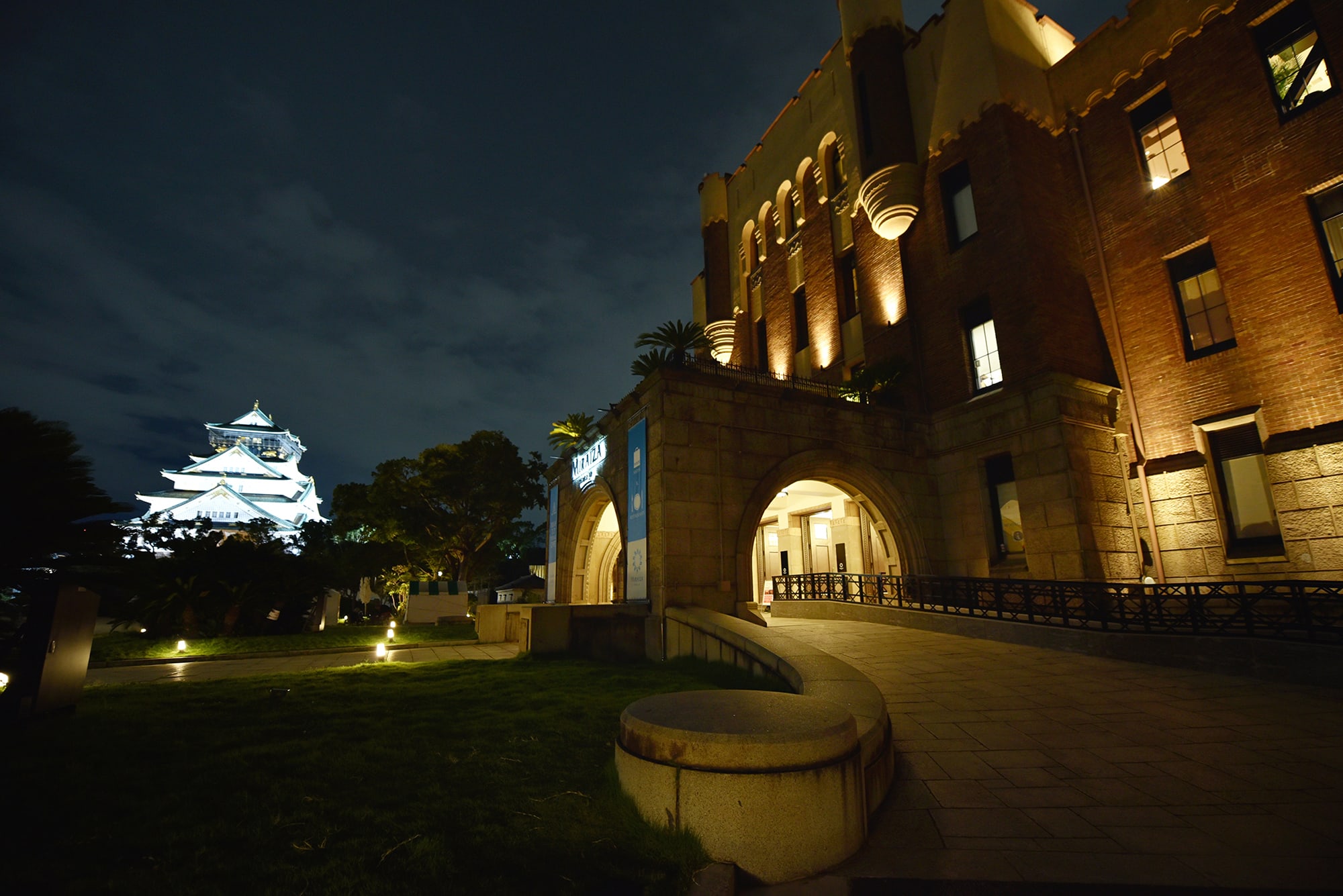 SENSAI expresses the aesthetics of Japan

MIRAIZA Osaka-jo is situated right near the Osaka Castle. The Grand Gala Dinner in celebrating the 30th Anniversary of the Relais & Châteaux Japan was held at this building.

SENSAI, the Japanese cosmetics brand which has been highly praised in Europe, had returned to Japan in 2019. After their debut in 1983, the SENSAI products are now sold in department stores and perfumeries in more than 40 countries throughout Europe, the Middle East and others. The brand has established its position as the prestige cosmetics brand by continuously receiving high acclaim by many women from Europe for their delicate and comfortable experience. 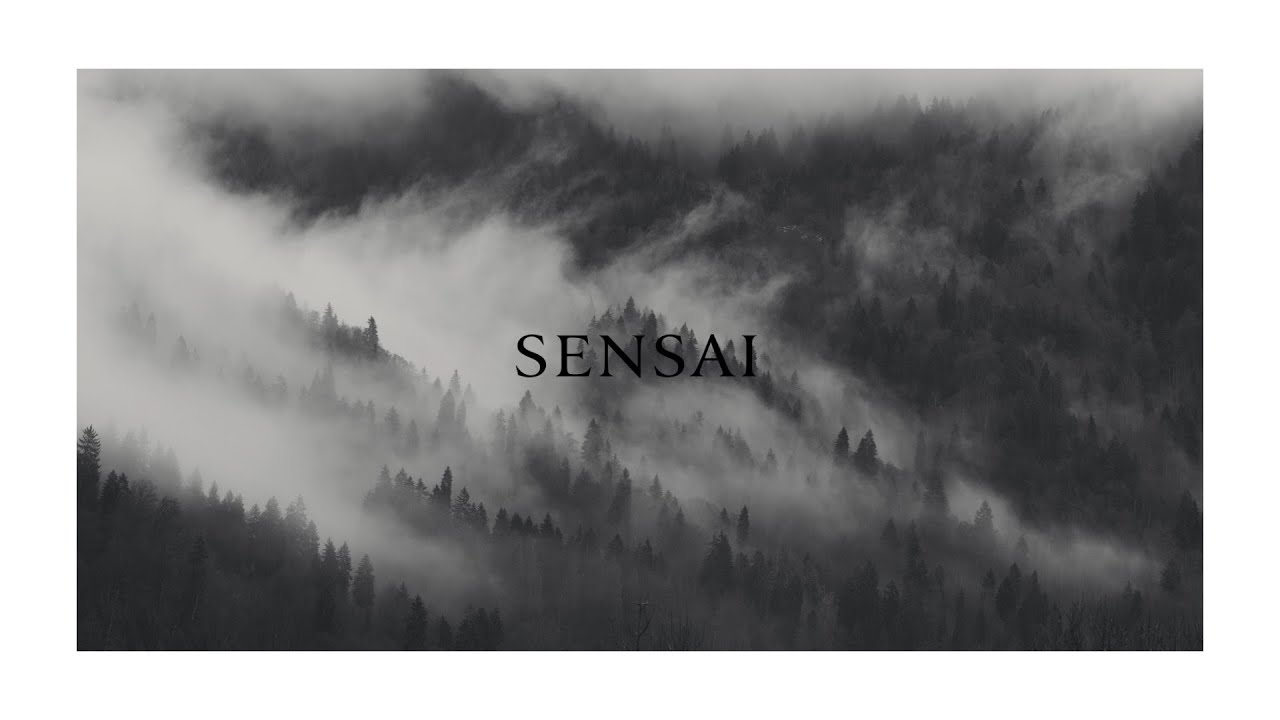 The aging care brand SENSAI, developed its brand outside of Japan using silk as its keyword. While the brand gathers attention from its first debut in Japan, the AS Series made its appearance at Osaka. The series was presented at the Grand Gala Dinner for celebrating the 30th Anniversary of Relais & Châteaux Japan. Celebrities from around the nation gathered to celebrate at the MIRAIZA Osaka-jo, the hall situated inside the Osaka Castle Park.

The Relais & Châteaux was established in France in 1954. Only the first-class hotels and restaurants which have qualified through their strict examination process are included in their worldwide organization. The Relais & Châteaux is known for bringing the French esprit to the world, and SENSAI is known for returning to Japan after receiving praise from Europe. The SENSAI’s AS Series were displayed using open-air tea ceremony seats and product booths at the Grand Gala Dinner. 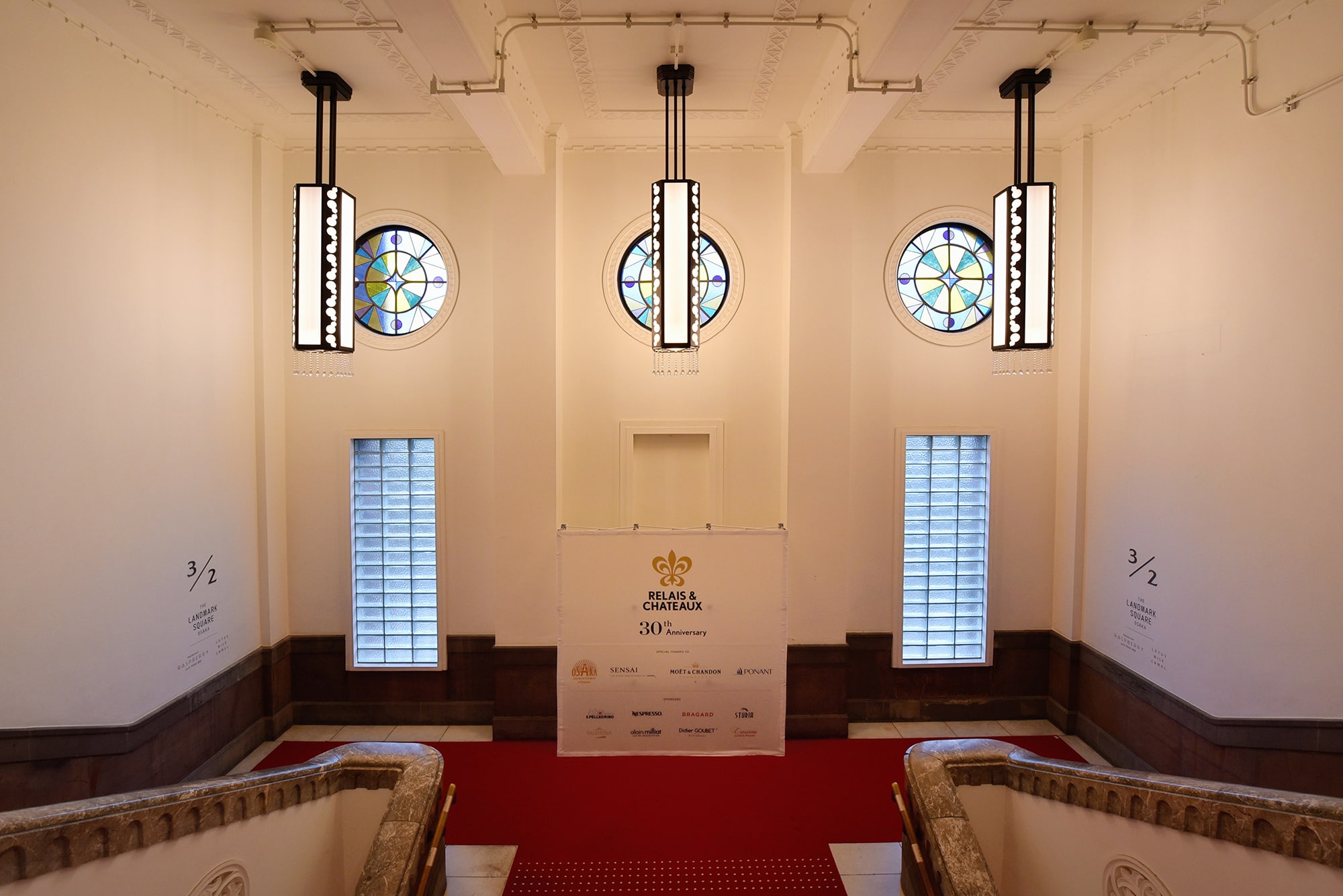 The magnificent architecture was formerly the Osaka City Museum and originally used as the headquarter for the Imperial Japanese Army’s 4th Division. 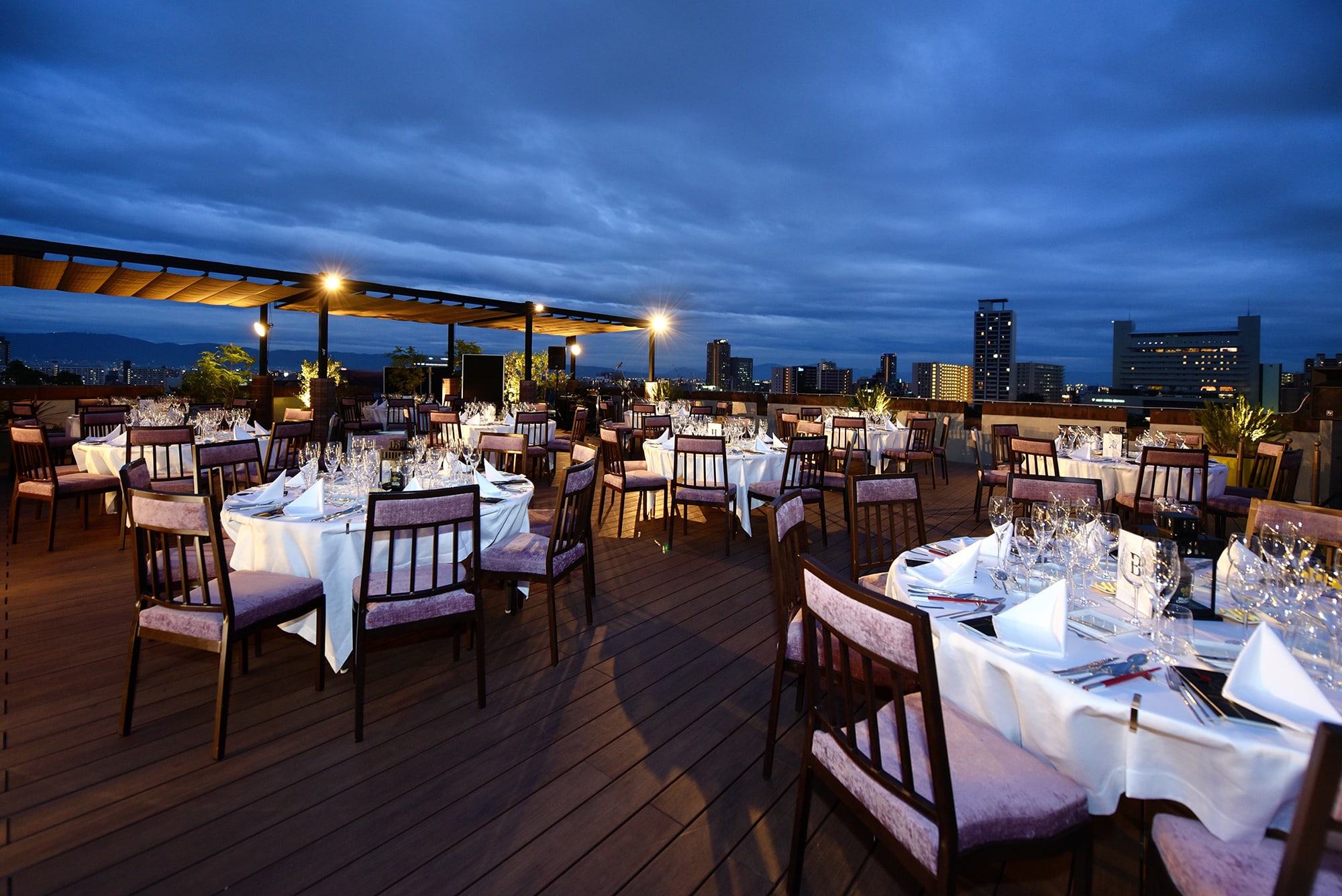 Around dusk, the guests are about to arrive at the terrace where the venue was held. 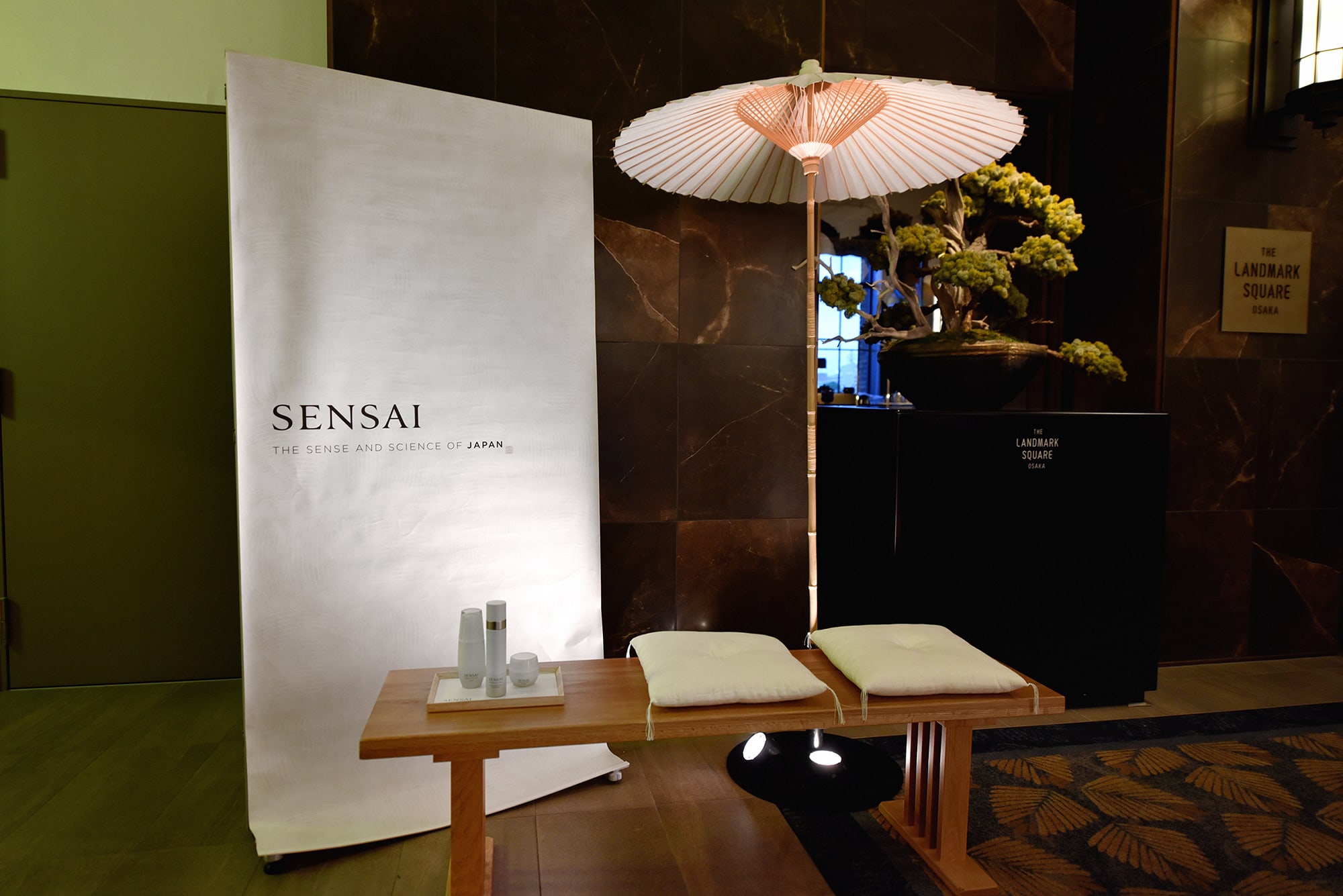 SENSAI booth at the venue. The products were displayed using open-air seats for tea ceremonies. 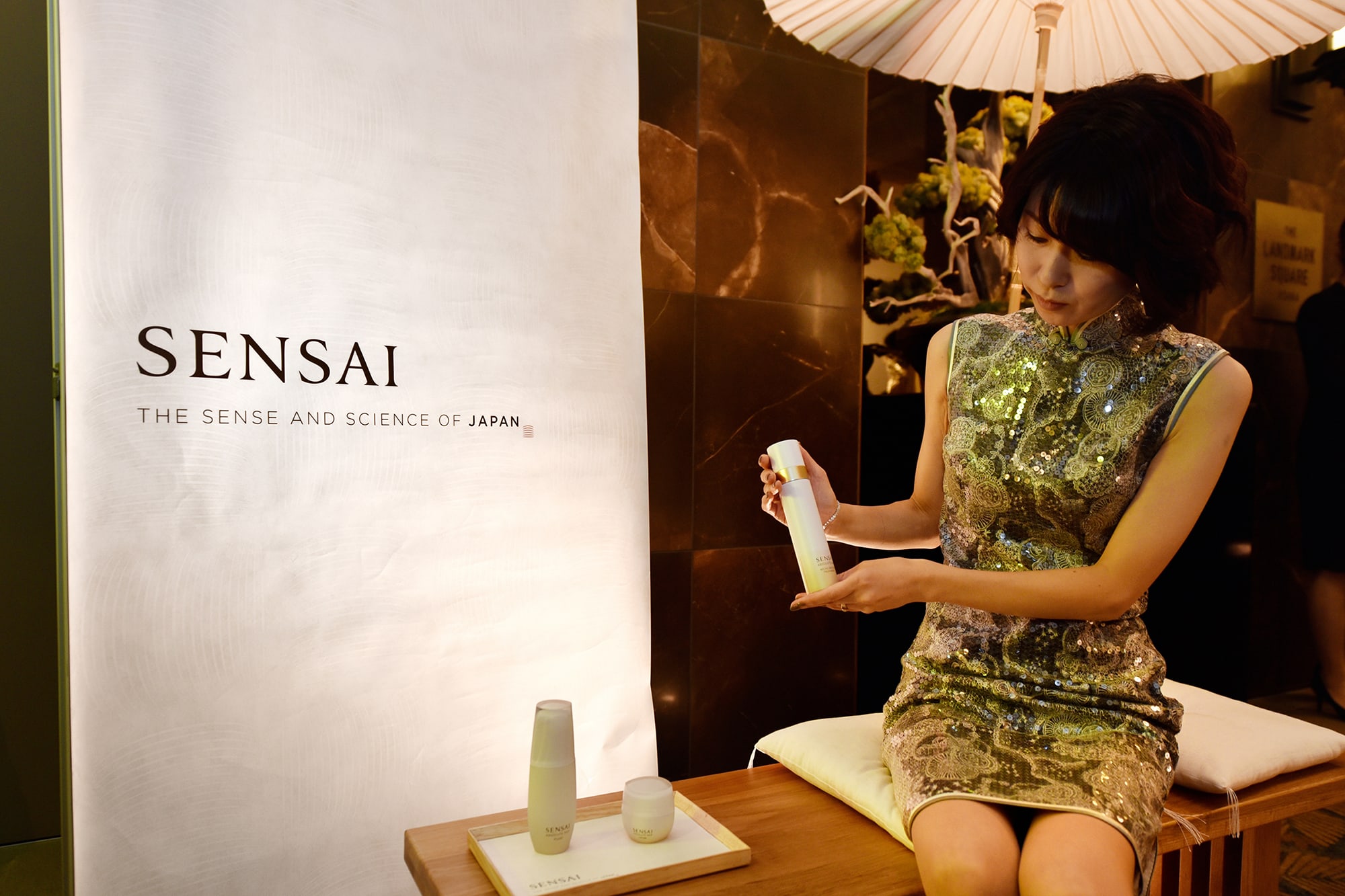 Guests from overseas also visited the SENSAI booth to experience the AS Series.

At the end of the gastronomic dinner, packages wrapped in bright white furoshiki (Japanese wrapping cloth) with SENSAI logo were brought to the tables. After the guests unwrapped the furoshiki, an elegant box made of paulownia wood appeared. Inside the boxes, guests found SENSAI’s foaming lotion, SENSAI AS Micro Mousse Treatment. Excited guests placed the dense lotion foam similar to silk cocoons onto their hands to experience the product. As soon as the foam was pressed onto their hands, the guests experienced their skin absorbing the lotion at once, and their skin being moisturized. The finale of the dinner became an unexpected moment of surprise for the guests.

The SENSAI AS Micro Mousse Treatment appeared from the wrapped furoshiki with SENSAI logo. 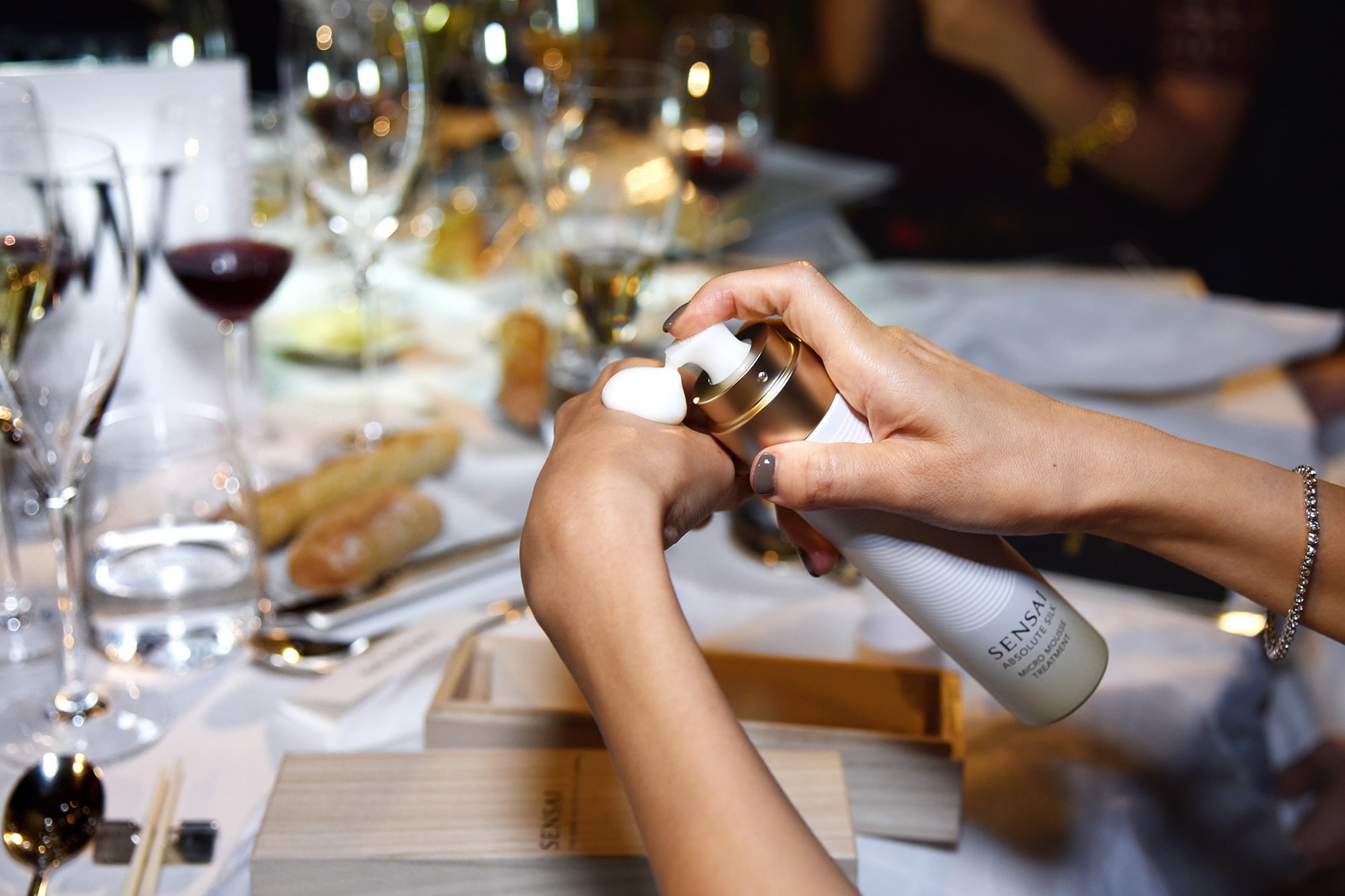 The guests were amazed and marveled by the texture of the foam after trying the lotion foam. 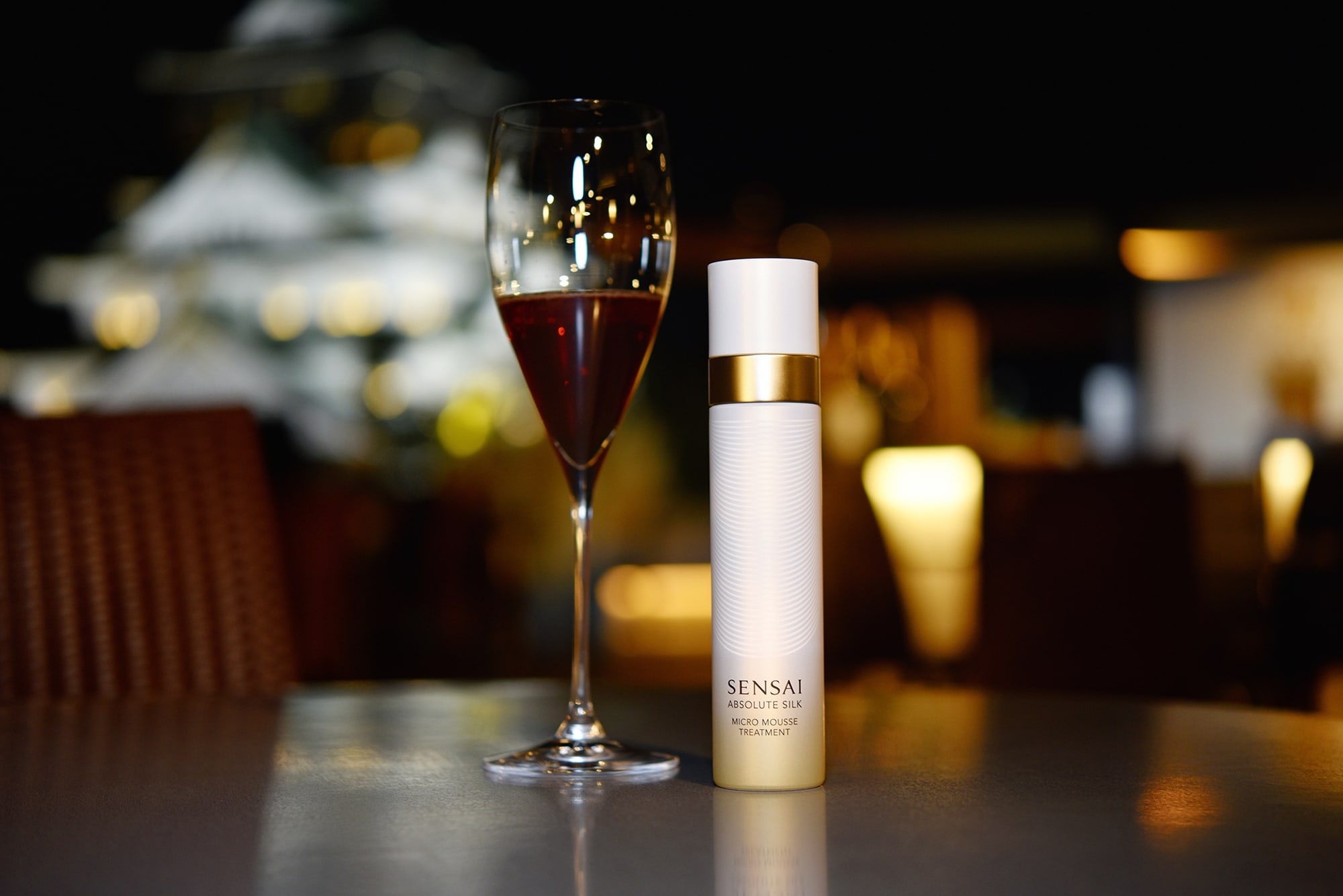 The SENSAI AS Micro Mousse Treatment became a surprising gift for the guests attending the Anniversary Grand Gala Dinner.

When the final dessert dish was presented, the excitement of the guests was brought to further surprise. The Relais & Châteaux restaurant member, Otowa Restaurant’s patisserie, Asuka Otowa presented the “Oeufs à la Neige SENSAI”. The silky and rich foam of SENSAI was expressed using the fromage blanc mousse, the fresh aroma was expressed using the citrus sauce and jelly, and SENSAI’s delicate whiteness was expressed with the vanilla ice. The dessert was exquisite and rich in depth. The traditional french dessert arranged with the image of SENSAI finished the gastronomic feast with its delicate and beautiful taste. 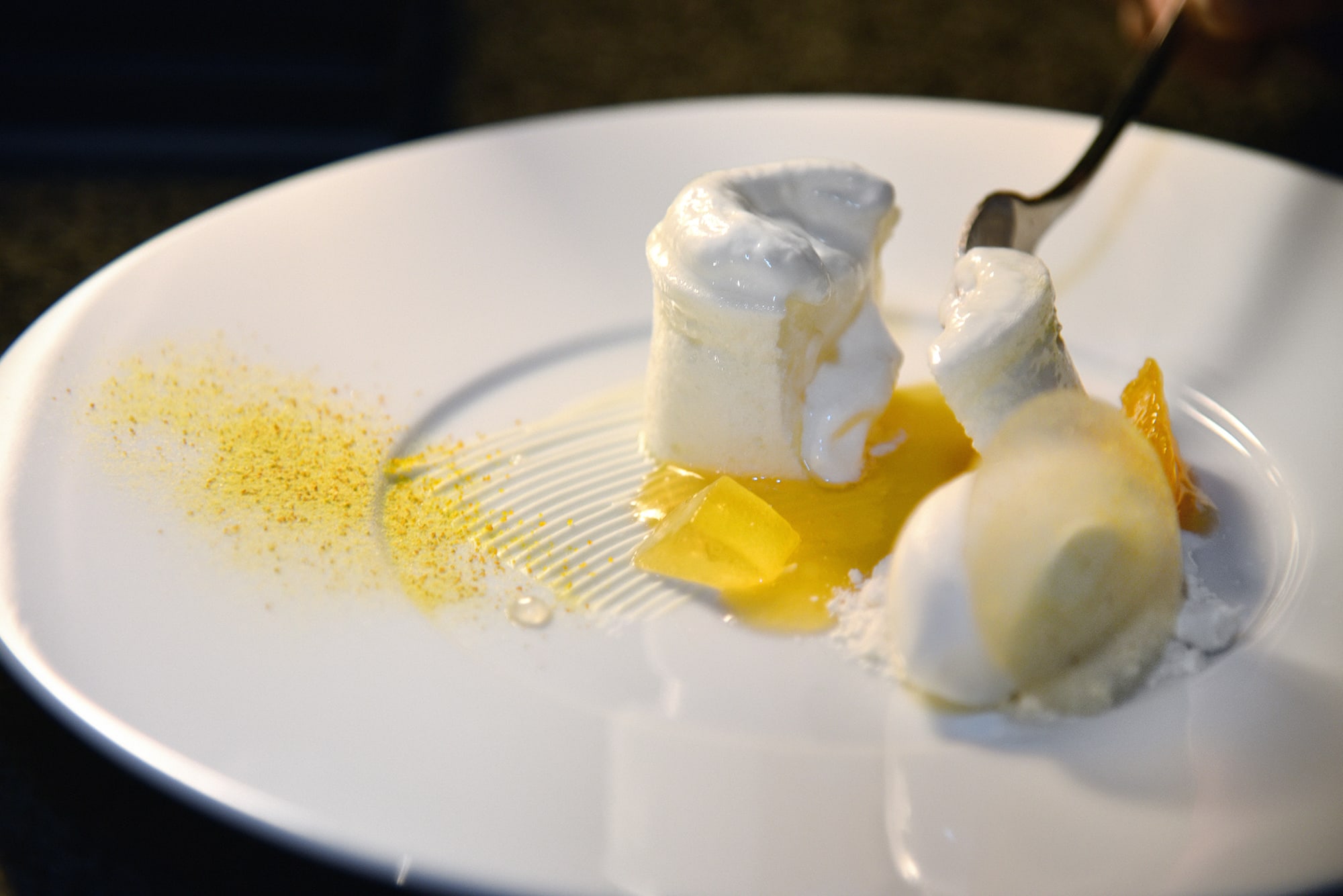 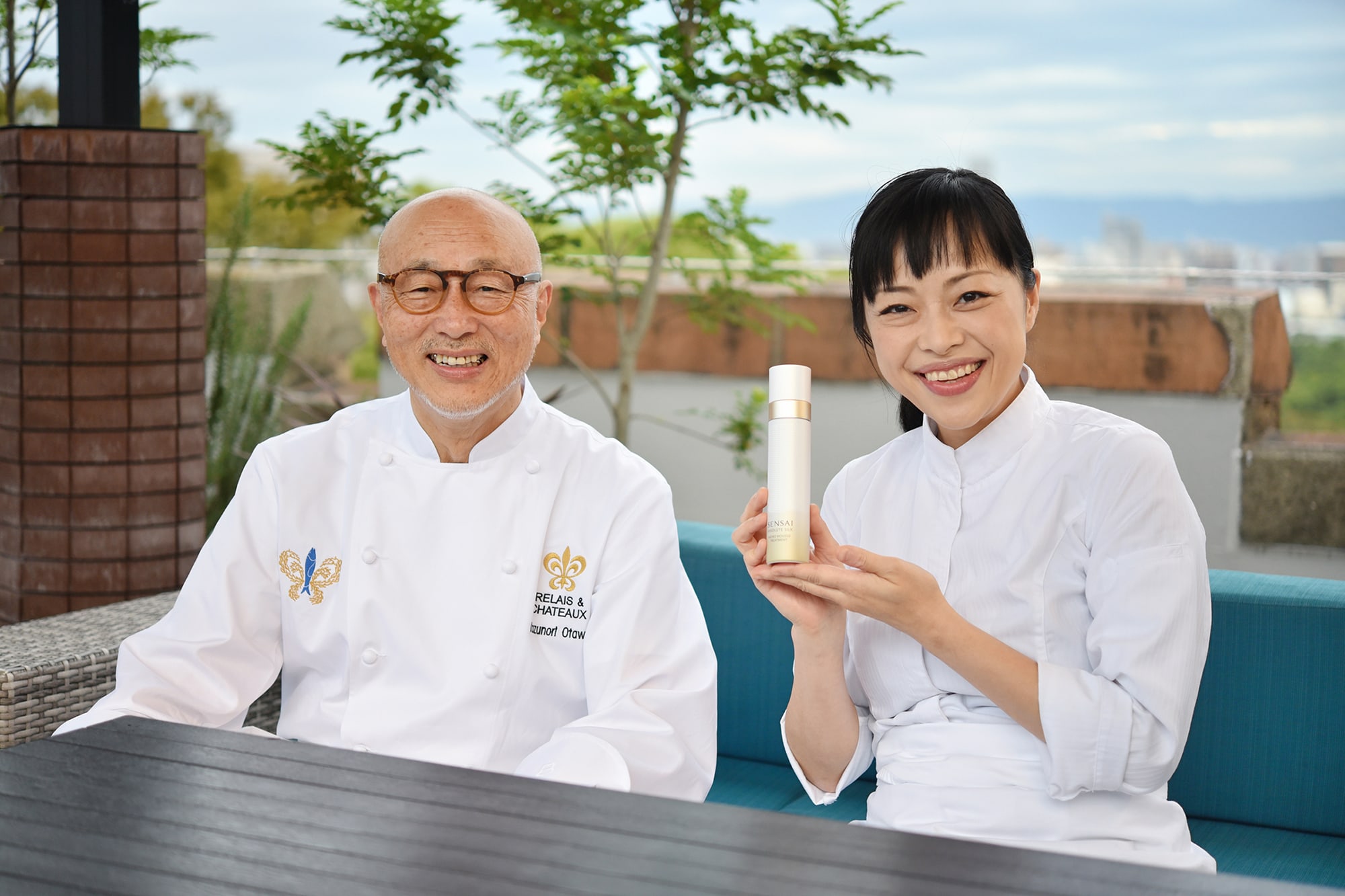 Kazuki Otowa and Asuka Otowa from the Otowa Restaurant. The restaurant is a member of the Relais & Châteaux. The two have created the Oeuf a la Neige SENSAI specially for the Grand Gala Dinner.

The AS Series is the core of SENSAI’s skincare. The series aims to achieve skin with smoothness, sleekness and elegant radiance found in Koishimaru Silk through minimal procedures using the lotion, fluid or cream. One of the products to highlight is the “SENSAI AS Micro Mousse Treatment s”, the product which can be said to revolutionalize the concept of lotion. By just pushing the nozzle, the micro-carbonated bubbles appear on the hand. When the airy foam is placed onto the face and gently hand-pressed, the foam spreads as if it is about to melt and effervesce into the skin. The skin is then moisturized and achieves a silky radiance. Being only a lotion, this signature item of SENSAI satisfies both the skin and heart.

SENSAI have made their triumphant return to Japan as the super prestige brand. The series carries a range of products from skincare to makeup items. The night of the Grand Gala Dinner has become a magnificent night to celebrate the return of the brand that expresses the delicate Japanese aesthetics to the skin of the women in Japan and the world.

The Skincare Series that Restores… 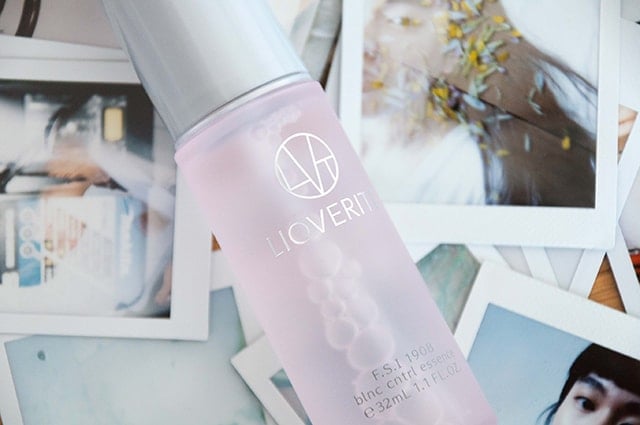 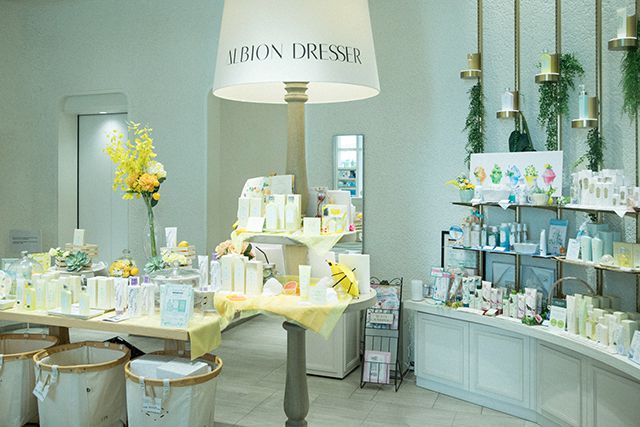 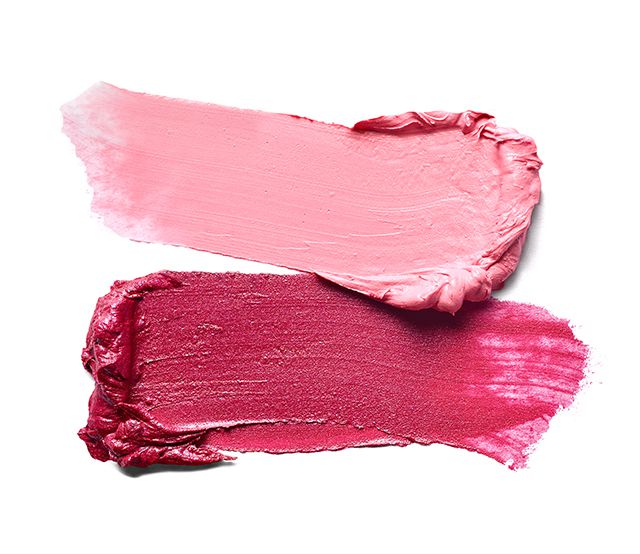