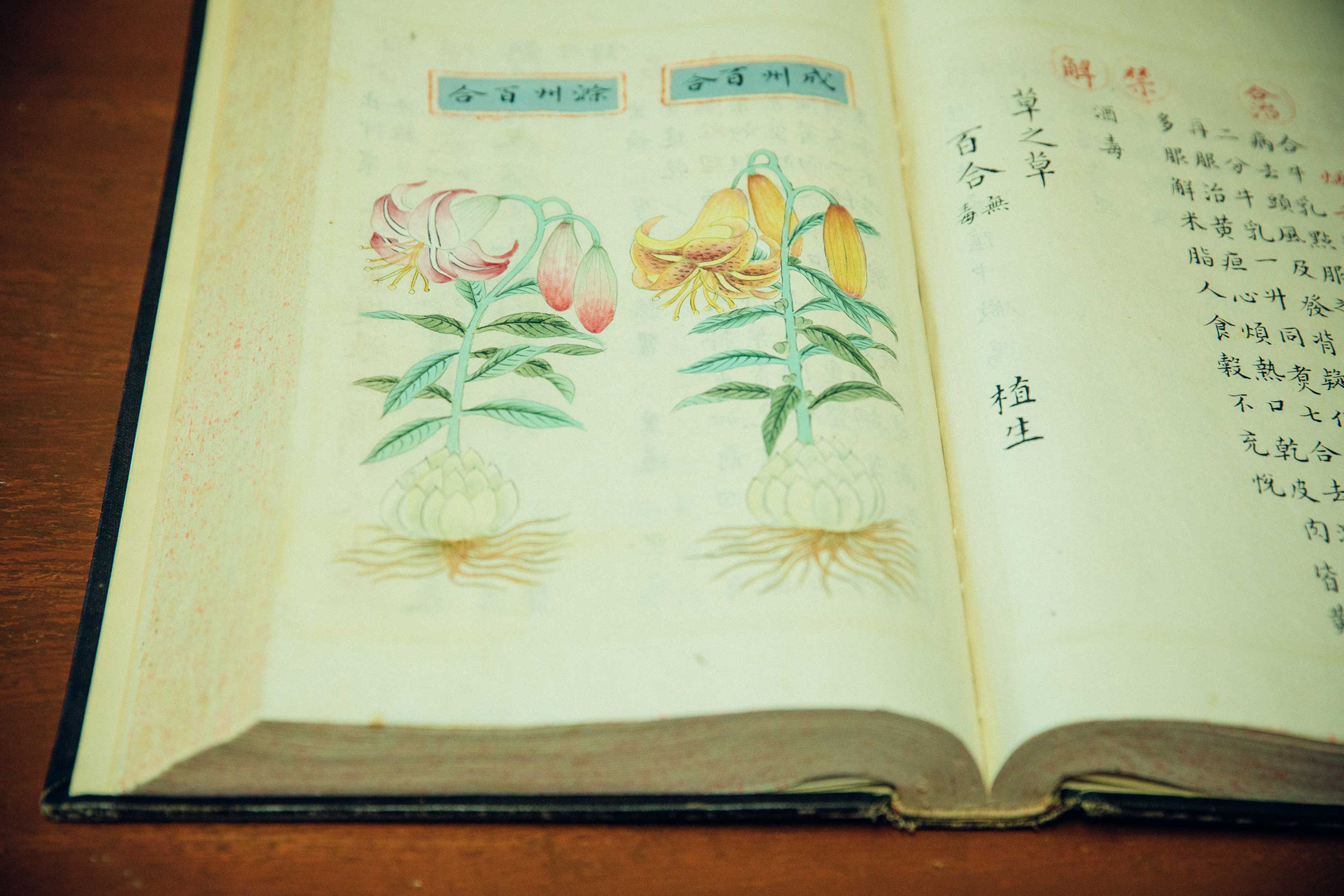 “Kampo”—Japanese traditional medicine, which draws attention around the world

The power of Japanese traditional medicine Kampo, seen through the eyes of Watanabe—director of Shukindo Otsuka Clinic in Yotsuya, Tokyo

Kampo, which developed its own style, is now drawing attention around the world

The clinic lies in a quiet residential area in Yotsuya at the heart of Tokyo, where the sound of chirping birds is heard in the distance. The building surrounded by green, resembles a nostalgic feel of the Showa Era. Upon sliding the door, you enter the front porch and a melancholic reception and a waiting room awaits you. Almost immediately, you feel your soul and body slowly relax with the scent of Kampo in the air. 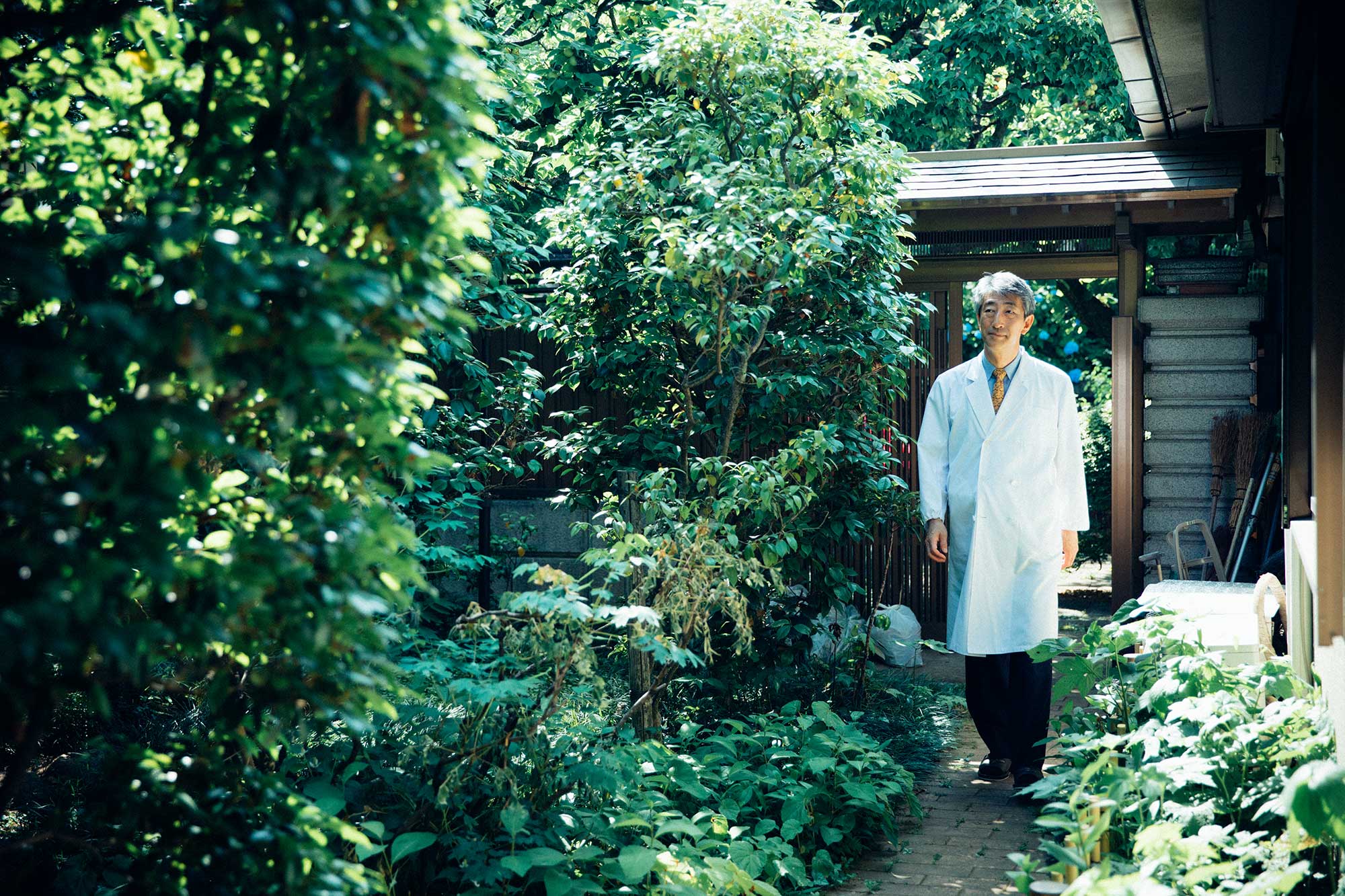 Shukindo Otsuka Clinic is a clinic with history established in 1931 by Keisetsu Otsuka, the first director of the clinic who founded the basic of modern Kampo. Today, serving the director of the clinic is 4th generation, Kenji Watanabe. Watanabe is a doctor of Western medicine, but he also studied Kampo since he was a student. He now seeks to become a “general physician,” who mixes both Western and Eastern medicine.

“Kampo is a traditional therapeutic system of Japan. Han dynasty’s ancient Chinese medicine found its way into Japan, but since its ingredients was hard to find in Japan, it developed its own style. For example, abdominal examination is Kampo’s original way of consulting patients. The way they provide prescription is originally Japanese too. The goal of Western medicine is to heal sickness itself, but Kampo attempts to heal the person who is affected by the sickness. Even if patients have the same sickness, their medicine varies depending on the constitution of their bodies or whether they are sensitive to cold or not. The degree of individualization is very different between China and Japan.” 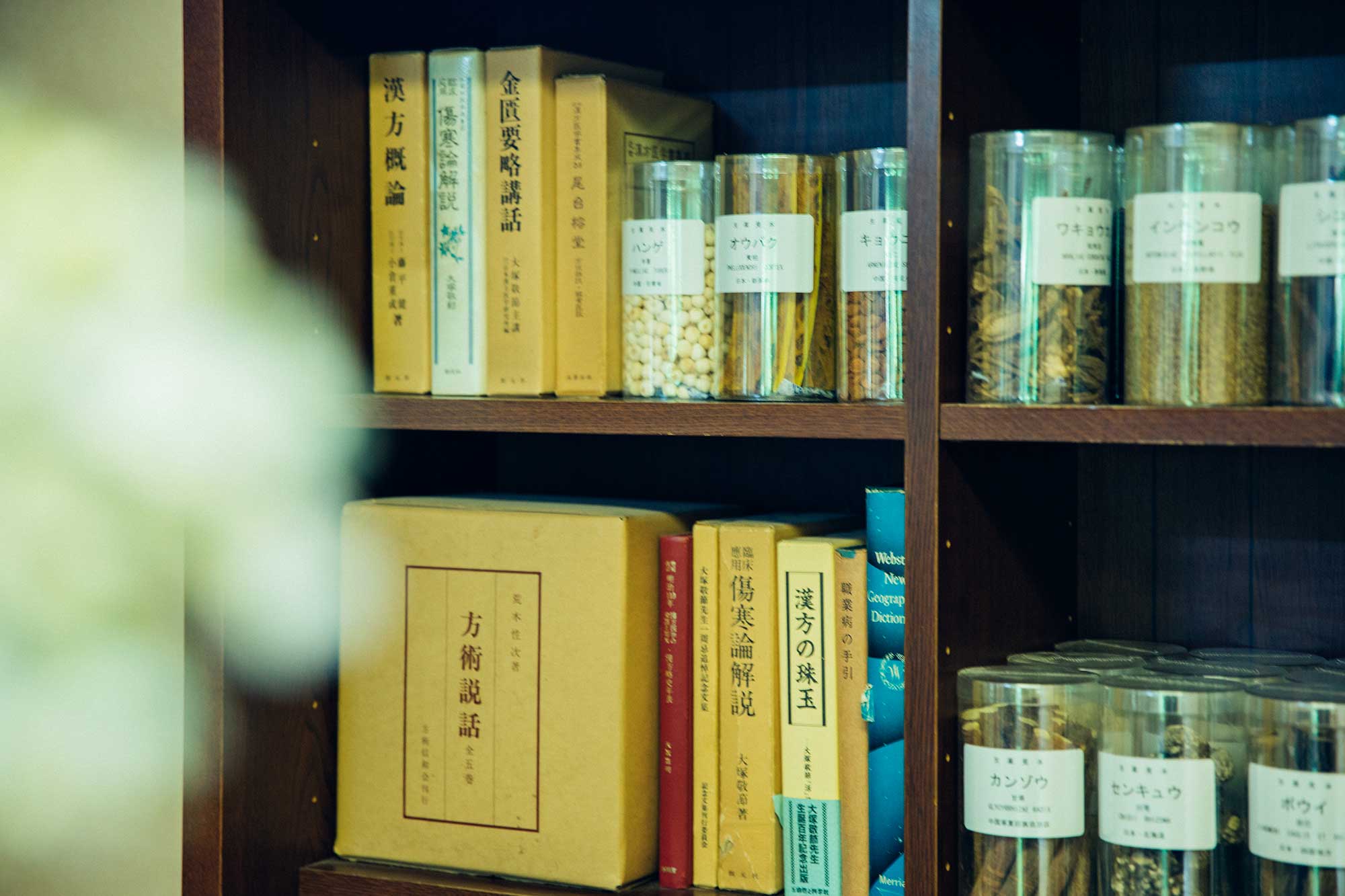 A shelf with medicine and books

Chinese Kampo is based on herbal medicine, in which optional herbs are mixed, according to each symptom. On the other hand, Japanese Kampo is based on prescription. Herbal medicine—which amount is decided in advance—is mixed based on the prescription. Then a couple of doses are arranged accordingly. Research on Kampo made progress in the Edo Era, in which original Japanese prescriptions were developed. In addition, Japan placed value on abdominal examination that was not occurred in China, which later influenced China and South Korea. 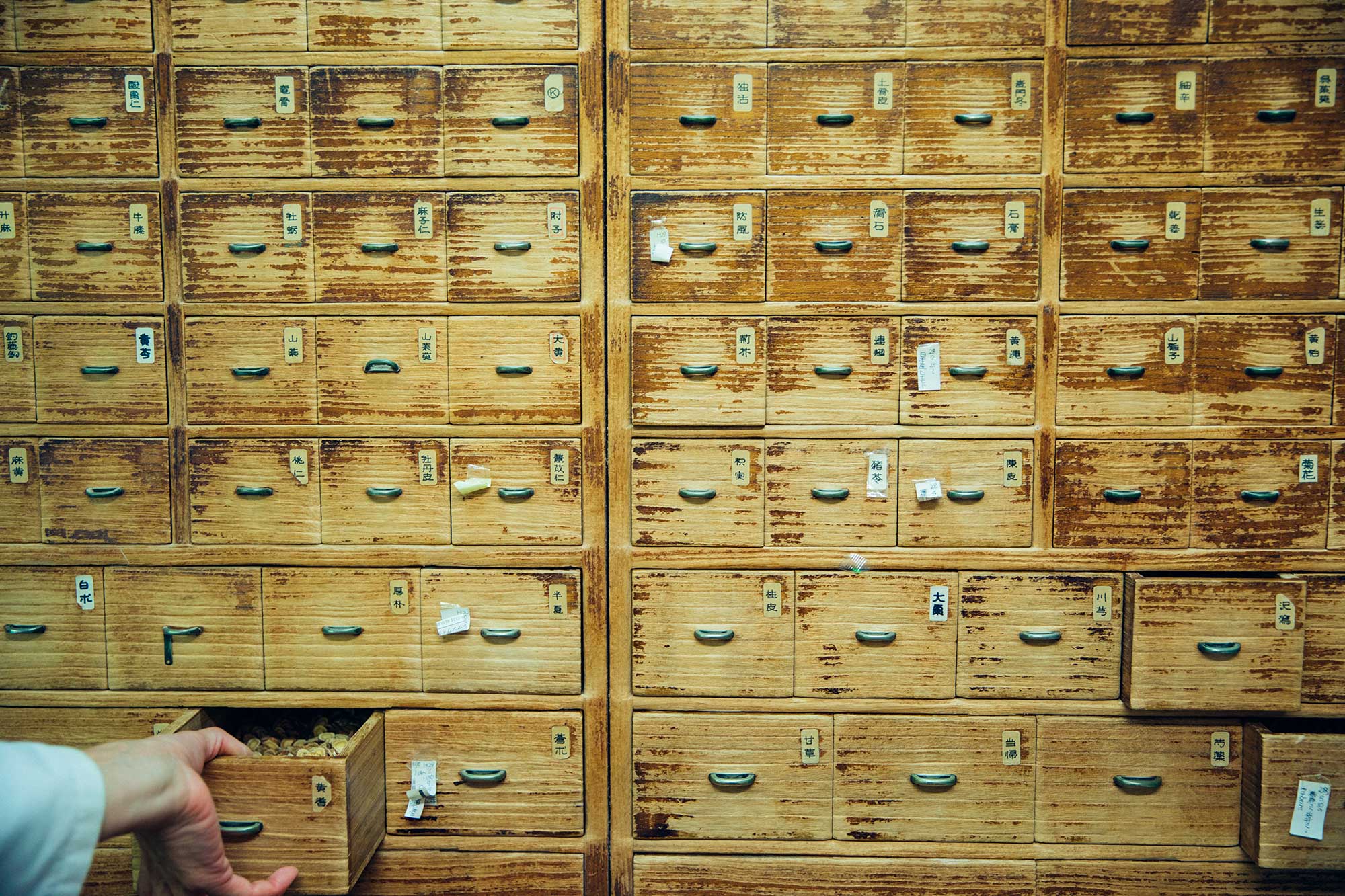 A medicine cabinet chest, which contains a selection of quality medicines

However, Kampo gets left behind upon entering the Meiji Era. It is not until the 1970s that it starts to be re-considered again. “Traditional medicine starts to be re-examined around the world again, as a result of Western medicine, which had become too segmentalized. Then, upon entering the 1990s, people started to take notice of “integrated medicine” that unites both Western and Eastern medicine.”

Many patients visits Otsuka Clinic from China and South Korea

There are many people who feel hesitant to visit a Kampo clinic, despite having interest in them. It’s because they have no idea as to what kind of remedies there are and what occasions they can use them for. “Kampo is a type of medicine that works toward the human body and soul. People with various disorders visit Otsuka Clinic.” Kampo is subject to treating symptoms that are diagnosed as headaches, sense of fatigue, coldness, palpitation, stomach upset, constipation, diarrhea, dysmenorrhea, acne and atopic dermatitis. At the same time, it also works toward illness that cannot be identified by Western medicine. 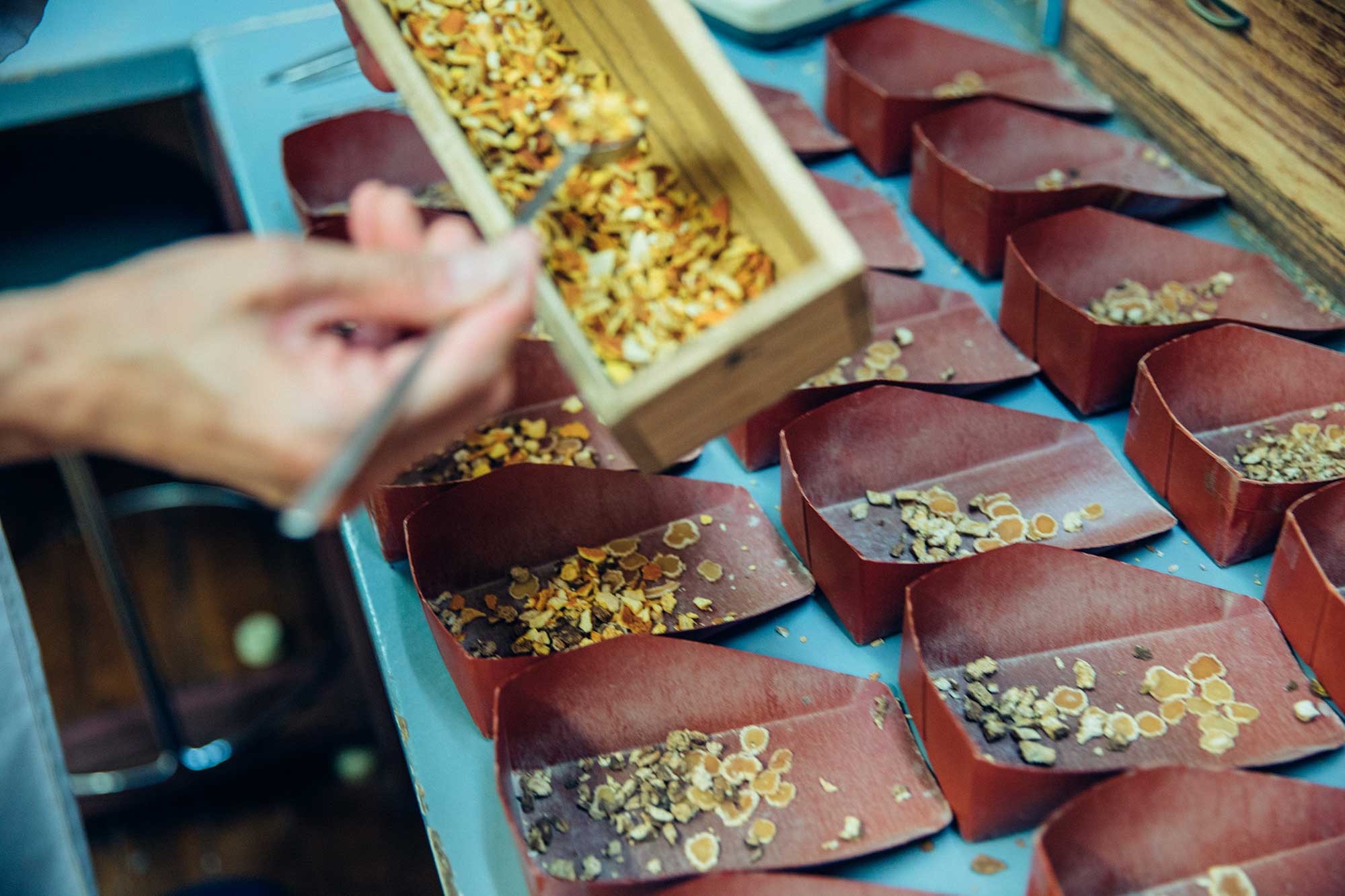 Among the patients who visit the clinic, are many with illnesses that are difficult to cure including cancer, collagen disease, ulcerative colitis and multiple sclerosis. In the case of cancer treatment, for example, side effects of chemotherapy and radiation therapy can be reduced by Kampo. “There are many cases in which chemotherapy is carried out and sickness is cured, because patients were able to reduce side effects through Kampo. There are also people who use Kampo to prevent recurrence and relapse. Moreover, some people are able to recover just by using Kampo, after they improve their quality of life.” There are also cases in which people with mental illnesses such as panic disorder, recover in a short period of time. There are many patients who regard Otsuka Clinic as a family doctor, whom they consult through generations. In recent years, patients who visit the clinic from overseas are on the increase too. 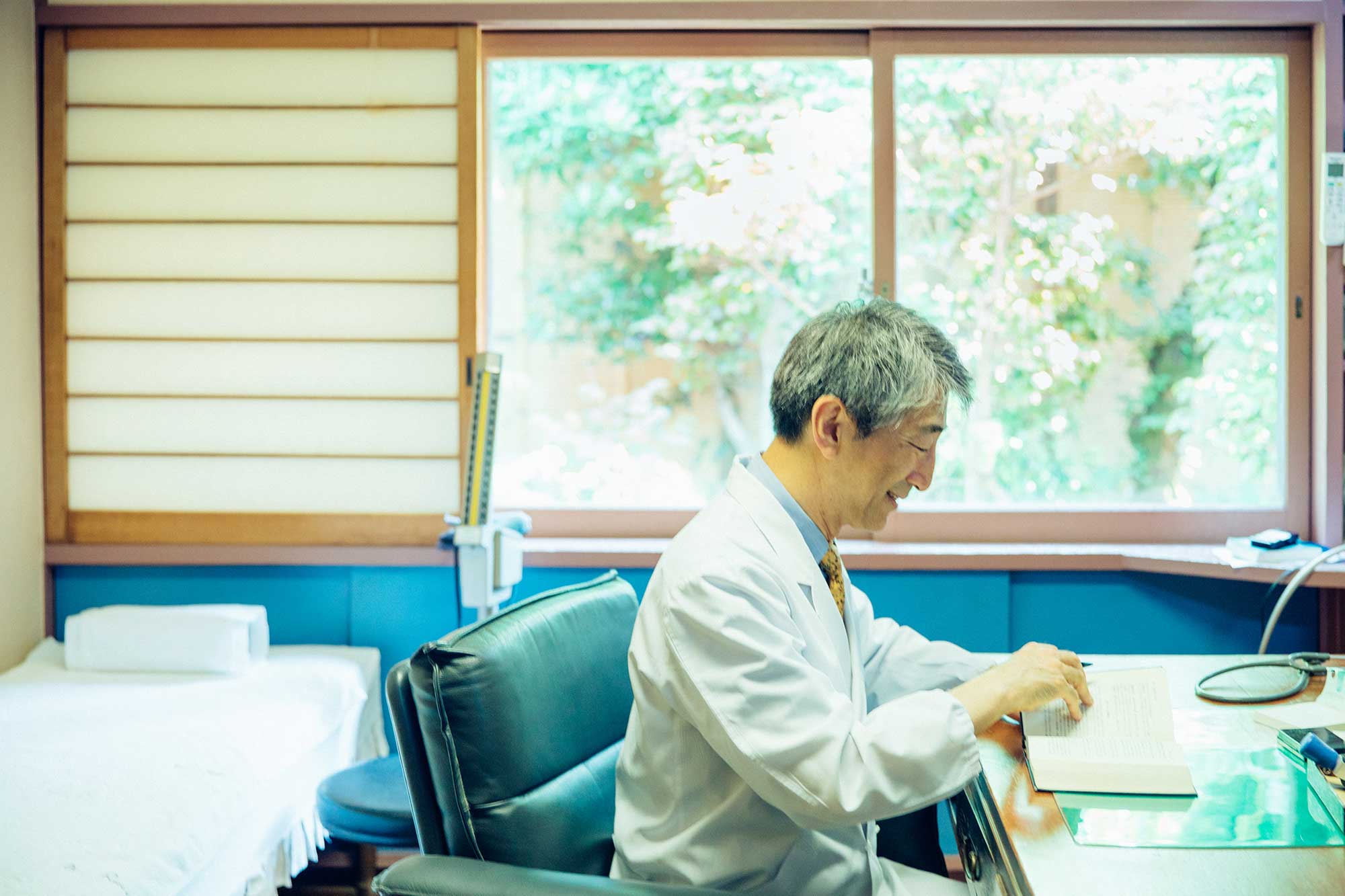 Director Watanabe in his consultation room. He takes a lot of time listening to new patients.

Currently, the clinic puts emphasis on treating people’s presymptomatic diseases using Kampo. “Kampo is made up of three pillars: herbal medicine, acupuncture treatment and physical care/curing. The most important aspect is physical care, so we guide our patients to eat, exercise and sleep well. If you balance these well and regulate your daily life, and use Kampo when you’re faced with disorders like fatigue and coldness, you are able to prevent various sicknesses in advance.”Today, Watanabe serves as an advisor for Kanagawa Prefecture to promote presymptomatic diseases. The modern world sees an increase in people with presymptomatic symptoms, because they are exposed to excessive stress. If Japanese traditional medicine Kampo spreads through to even the younger generation, many people will be able to maintain both their physical and mental health.